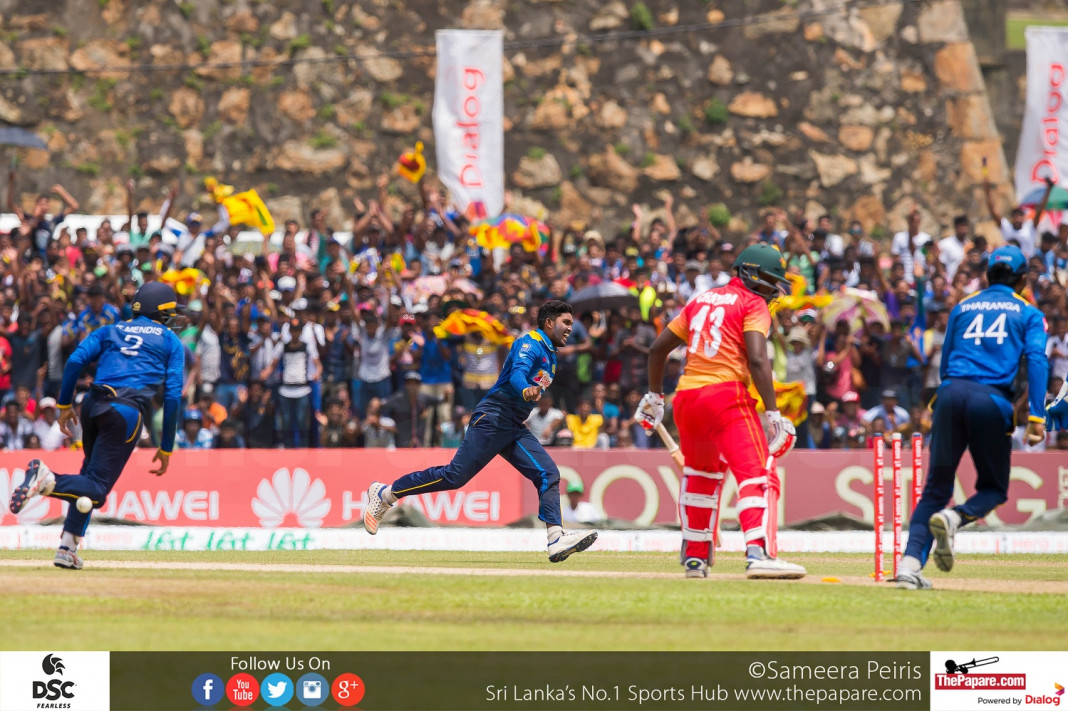 Flu-hit Sri Lanka put up a dominant all round display on Sunday in Galle as they defeated Zimbabwe by 7 wickets in the 2nd ODI match to level the five-match series, 1-1.

Lakshan Sandakan registered career-best figures, 4 for 52 and debutant local boy Wanindu Hasaranga claimed a hat-trick in his first international game to restrict Zimbabwe to 155 while vice-captain Upul Tharanga anchored the chase with his 34th half-century to take Sri Lanka over the line with almost 20 overs to spare.

Hasaranga, brother of Chathuranga De Silva became the first Sri Lankan and only the third bowler in the world after South African Kagiso Rabada and Bangladeshi Taijul Islam to claim a hat-trick on ODI debut as he wrapped the Zimbabwean tail with a fine display of leg-spin.

Earlier after being sent into bat, Zimbabwe opening batsman Solomon Mire who smashed his first-ever century in professional cricket on Friday to help Zimbabwe canter to victory, was caught behind off Nuwan Pradeep for a duck today. Hamilton Masakadza who was dropped on 0 by Kusal Mendis off LasithMalinga made a promising 41 before falling to a brilliant return catch by Asela Gunarathne who was also ill yesterday night.

Mendis and Malinga were both doubtful to start the match according to SLC’s media release yesterday due to influenza viral flu but they recovered in time to take the field.

Sri Lanka introduced the spin of Lakshan Sandakan right after the first power play was concluded. He was brought into the team having recovered from virus flu which cost him the place in the first match. The left-arm chinaman struck in the 17th over when Craig Ervine was caught behind for 22.

Sri Lanka continued to strangle the visitors with accurate, disciplined spin bowling even though they continued to use the sweep and reverse sweep constantly to avert the effectiveness of home team’s bowling prowess.

Sikandar Raza miscued a reverse-sweep and holed out at cover-point off Sandakan while Sean Williams managed to sweep a full-toss off Danushka Gunathilakastraight down the deep square-leg fielder’s throat.

Zimbabwe looked completely out of context and missing the fight which they showed two days ago whereas Sri Lanka’s body language was more poised towards a positive result. Sandakan bowled Ryan Burl around the legs and a couple of overs later, in the final ball of his spell, castled Peter Moor to end a match-winning spell.

Former Richmondite, 19-year old Hasaranga dismissed Malcolm Waller for 38, the 8th wicket in the innings and his maiden wicket in international cricket. Waller had made 6 fours during his 28-ball knock prior to going for a big heave and chopping onto the stumps. In the very next ball, number 10 batsman Donald Tiripano was caught LBW plumb in front while last man Tendai Chatara was castled with a ‘googly’ to claim Sri Lanka’s 8th hat-trick in ODI cricket.

Chasing a modest target of 156, Sri Lanka lost Danushka Gunathilaka and Kusal Mendis in two consecutive deliveries, Gunathilaka chopping one onto the stumps and Mendis being caught down the leg-side off Tendai Chatara.

Experienced Upul Tharanga and Niroshan Dickwella steadied the chase with a fine, composed partnership of 67 for the 3rd wicket before the latter lobbed a return catch to Zimbabwe captain Graeme Cremer. Dickwella struck 35 off 54 deliveries with 4 boundaries but threw away his wicket.

Tharanga was then joined by skipper Angelo Mathews as they dominated the Zimbabwean bowling with an 81-run unbroken stand for the 4th wicket in 71 balls to take their home to victory. Tharanga’s 86-ball unbeaten knock of 75 contained 8 fours, his second consecutive unbeaten knock at number four while Mathews chipped in with a valuable 28 not out.

Both teams will now travel to Hambanthota for the remaining three ODIs. The next game will be worked out on 6th July at Mahinda Rajapaksha International Cricket Stadium in Sooriyawewa.

Man of the Match – Lakshan Sandakan