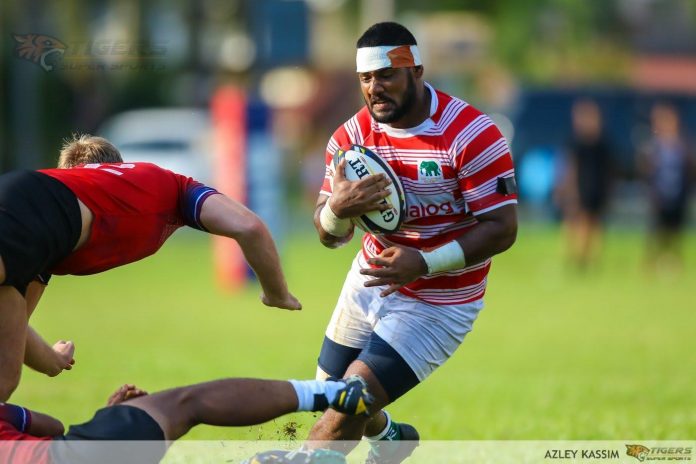 Two tries from Sri Lanka President’s XV skipper Omalka Gunarathane in the dying minutes of the game were not enough for the Lankans to overcome Malaysia in the international friendly played this evening at the Bukit Jalil in Kuala Lumpur.

Sri Lanka’s lack of conditioning seemed to be the turning point in the first half as they continued to infringe, gifting a total of 11 penalties in the 1st half to the opposition. Their dismal performance in the first half ended up costing them the game ultimately, as the visitors went down by 6 points.

For the Lankans, it was only the two penalties off Samuel Maduwantha’s boot in the first half. The hosts, Malaysia took their own cool time to settle in, but once they did, they left Sri Lanka in the dust.

Mohammed Fairooz drew first blood for the side with a 40-meter penalty and later his cross kick found his winger Wye Wye who scored the opening try.

Two more tries followed Wye Wye’s score with #8 Etonia Vaqa barging through the helpless Lankan defence. Minutes later it was Mohammed Syahir who got his name on the scorer’s list when he steamrolled through the middle.

Malaysia finished at 24 points at half time, converting all three of their tries.

The second half saw Sri Lanka stage somewhat of a fightback. Thilina Wijesinghe’s two penalties early in the second half gave a glimpse of hope for the visitors but Sri Lanka’s discipline seemed to push the side back just when they started clawing back.

Etoni Vaqa continued doing what he does best and over he went for his second converted try.

The President’s Tuskers were too late in making their comeback to the game. On the brink of the 70th-minute #8 Omalka Gunarathane broke off a 5-meter scrum to score the team’s first try.

Minutes later, Gunarathane crashed through the midfield to score his second but it was all too late. With Sri Lanka not being able to hold on to possession in the final few minutes, it was curtains to their campaign in Malaysia.

Read more: President’s Tuskers too strong for the Barbarians

Other than Gunarathane, there was no real material impact from the rest of the side. The inclusion of Prasath Madusanka and Mithun Hapugoda at scrumhalf seemed to turn the tide a little.

Sri Lanka will have their tester when they play the Asia Rugby Division I at the end of the month. For the hosts, this encounter should liven their spirits as they face Korea, Japan and Hong Kong in the top division.