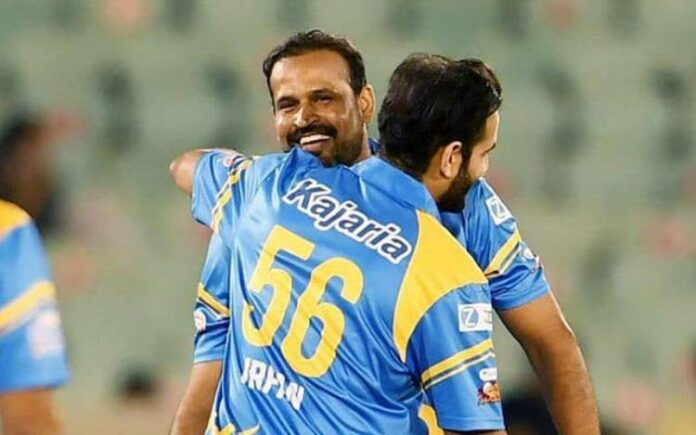 The opening match of the Legends League Cricket 2022 between the Asia Lions and the India Maharajas held at Al Amerat Cricket Grounds in Oman came to a close with the Maharajas winning by 6 wickets.

Without a knowledge of how much would be a good score on this brand new tournament, the former India cricketers won the toss and inserted the Asia Lions team to bat first.

For the Lions, it was the elegant Sri Lankan batter, Upul Tharanga, who top-scored with a dazzling knock of 66 runs off 46 deliveries. His innings included 7 delightful fours and 2 handsome sixes.

A late resistance from the Lions skipper, Misbah ul Haq, who scored 44 runs off 30 deliveries with 4 maximums, took Asia Lions to a total of 175 runs.

The right-arm seamer, Manpreet Gony, was the pick of the bowling for the Maharajas, as he  bagged 3 wickets for 45 runs.

The Maharajas got off to a shaky start with the top 3 back in the hut by the 7th over with the score on 34. But a 117-run partnership between Yusuf Pathan and skipper Mohammad Kaif took the Maharajas home comprehensively.

Pathan struck a magnificent 80 off just 40 deliveries sending 5 rocketing sixes into the stands and 9 screaming fours to the fence.

Kaif played a crucial innings in the chase with 42 runs to his name and made sure that one end was held tight as Pathan carried out his onslaught.

The icing on the cake was the quick-fire 21 the other Pathan – Irfan – made to conclude the chase with 5 balls to spare. Irfan scored 17 runs off the penultimate over to drive India to safety.

There wasn’t much to show for in the Asia Lions bowling although the Rawalpindi Express, Shoaib Akhtar, bowled as if he was never off the game, picking up 1 wicket and giving away only 21 in his 4 overs.