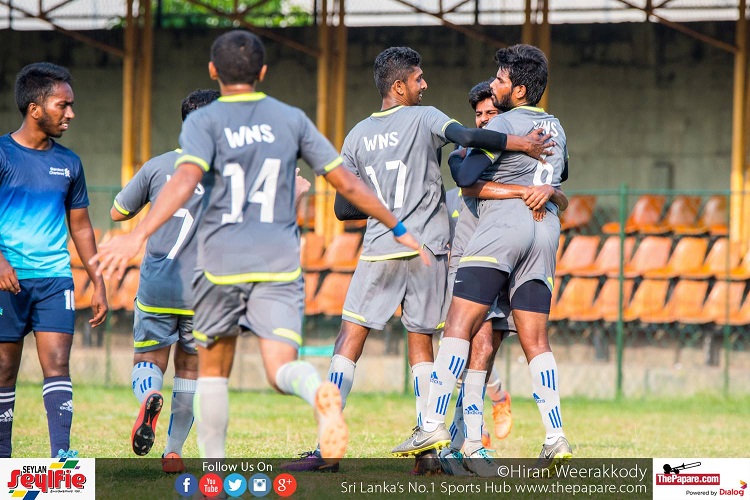 Heading into the final game-week, the decider was going to be between LB Finance ‘B’ and Amana Bank. LB Finance had three wins out of three while Amana Bank had 2 wins and 1 draw.

Amana Bank needed a win to secure promotion while LB Finance only needed a draw, which they eventually got in a 0-0 encounter at the City Football Complex.

LB Finance scored two goals in the 2nd half to defeat Dialog 3-1. Lakshan Thanuja opened the scoring in the 1st minute for LB before Rifad Mahil equalized in the 18th minute.

Dialog however could not mount a comeback as H.T.Ahamed and Thanuja doubled the lead after half time to give LB the win.

Mohamed Noordeen and Mohamed Sajid scored two goals each as Amana Bank comfortably defeated Singer 4-0. Noordeen opened the scoring in the 1st minute while Sajid made it 2-0 four minutes later. Amana Bank went into half time up 3-0 with Noordeen adding another in the 20th minute.

After half time Singer tightened their defence but let in the 4th goal in the 45th minute to end the 4-0.

Singer avoided finishing bottom of the division with a tight 2-1 win against Virtusa. It was A.G.Lakmal who scored first for Singer in the 17th minute. Lawrence Coppin equalized for Virtusa 5 minutes later but R.Kamal re-took the lead with a strike in the 29th minute.

Union Bank’s two first half goals were enough to give them the win against DFCC Bank. Samith Moraes and Srien Tius scored both goals within a minute to kill of the game in the first half.

Standard Chartered Bank kept the free scoring WNS Global goalless in the first half. However an enlivened WNS side showed no mercy in the 2nd half as they scored 4 goals.

Harein Jude scored in the 32nd minute while Dilan Jayawardena doubled the lead four minutes later. Thawshif Thariq made it 3-0 in the 40th minute and Henry Sandanam completed the rout with the 4th in the final minute.