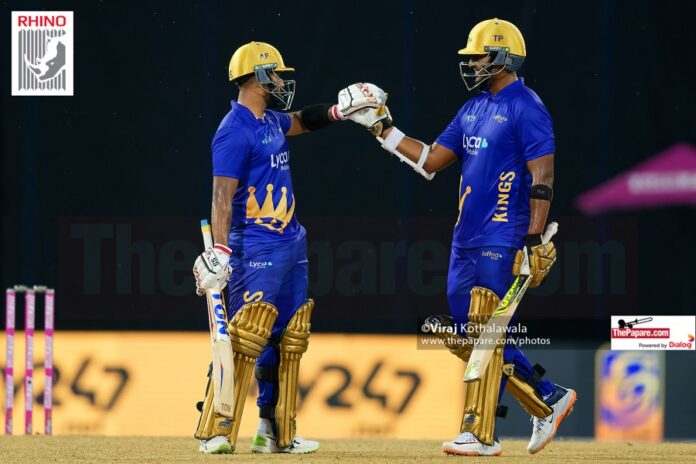 Avishka Fernando and Thisara Perera hit whirlwind half-centuries to take Kings to 181/6 from 14 overs after a heavy downpour interrupted the game for nearly two hours. The Warriors ended on 166 despite belligerent Rovman Powell’s 19-ball 61 as they crashed to their third consecutive defeat in the competition.

Kandy Warriors skipper Angelo Perera opted to chase but only a couple of overs were possible when the heavy rains arrived at Khettarama. However, after the game was shortened, Jaffna came out with an all-out license. Fernando slammed five consecutive 6s off TM Sampath’s sixth over of the match. It is the most expensive over of the entire history of the LPL, 31 runs.

Whilst Fernando reached his fifty in just 21 balls, skipper Thisara Perera hit the second-fastest fifty in the LPL history, smashing 50 runs off 19 balls (this record lasted only until Powell came to the crease) as the hapless Kandy bowlers had nowhere to hide, especially with the wet ball.

Fernando and Perera recorded the first 100+ stand in the second edition of the LPL, accumulating 105 runs in just 33 balls for the 3rd wicket. It is the highest run-rate of a century partnership in franchise leagues (run-rate 19.09). The previous best was between Chris Gayle and Evin Lewis in 2017, when they scored at 18.42. The Fernando-Perera stand ended courtesy uncapped UAE left-arm seamer Shiraz Ahmed. He removed both the half-centurions inside three balls.

However, the brutal hitting did not end with the wickets of Fernando and Perera. Chathuranga De Silva and Shoaib Malik contributed as Jaffna Kings posted a 181, at nearly 13 runs per over. Amidst all the carnage, Ahmed ended with impressive figures of 3 for 22.

Chasing a tough target of 181, Kandy Warriors got off to a solid start courtesy Kennar Lewis and Charith Asalanka. Even the world’s number one ranked spinner, Wanindu Hasaranga had a rare off-day, conceding 47 runs off his 3 overs. Asalanka’s quick-fire 19-ball 42 ended when Chathuranga De Silva got the breakthrough when the score was 64.

Even though Lewis struggled to power through, Rovman Powell kept Kandy Warriors in the hunt, when he stormed to a 15-ball fifty, breaking Thisara’s one-hour old record for the second-fastest fifty in the LPL history.

Kandy were 124 for 1 at the end of the 10th over. Powell smashed 61 off 19 balls with 2 fours and 7 sixes before being castled by Suranga Lakmal. When, Powell was dismissed, Kandy still required 36 off 16 balls.

Jayden Seales bowled a brilliant penultimate over, picking up both Kamindu Mendis and Lewis and gave away only 8 runs to seal the deal for Jaffna Kings. Lewis’ 36-ball 41 with 17 dot balls, proved to be too costly for Kandy Warriors. The entire match had 27 sixes from both innings.