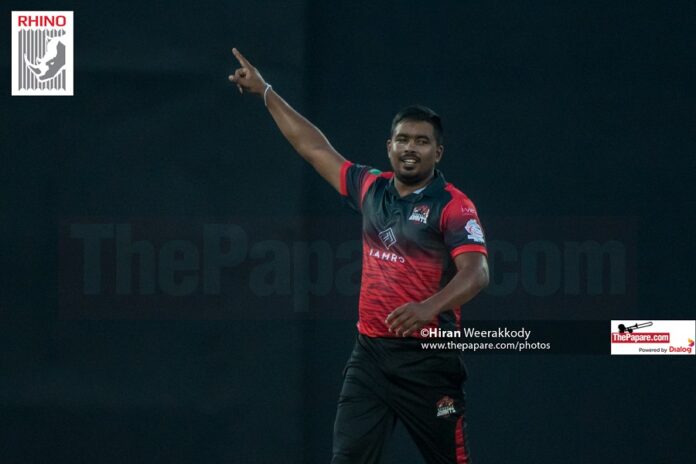 Dambulla Giants recorded their second win in the Lanka Premier League 2021 beating Colombo Stars by 18 runs in the 6th match of the competition on Wednesday evening at R. Premadasa International Cricket Stadium.

After opting to bat, the Giants posted the highest score of the competition – 195/6 in 20 overs before restricting the Stars to 177 despite some late surge by the Colombo batters.

In a competition, which has not seen the batters blossom yet, Dambulla’s foreign players – Phil Salt and Najibullah Zadran struck half-centuries. Salt was brilliant at the top of the order – reaching his second LPL fifty in 22 balls.

Salt was undone right after the halfway point in the innings. Zadran took on the mantle of accumulating runs following Salt’s dismissal. The left-handed Afghan smashed 6 fours and 2 sixes during his 40-ball 54. Zadran and skipper Dasun Shanaka added 77 runs for the 5th wicket which was the third-highest stand in the entire competition.

Shanaka used the paddles and sweeps very elegantly to score 38 off 25 deliveries with 3 fours and 2 sixes. Speedster Dushmantha Chameera was the pick of the bowlers for Dambulla Stars with 3 scalps for 34 runs.

Chasing a massive target of 196 runs to win, the Colombo Stars batting unit was rocked by spin early on. The ambidextrous spinner Tharindu Rathnayake, playing his first game, picked up two important wickets of Tom Banton and Sherfane Rutherford, while the experienced Imran Tahir made sure Kusal Perera was castled for 20, having smashed 2 sixes and 2 fours in his short stay.

Colombo Stars continued to lose wickets at regular intervals as none of the batters converted their starts into big ones. They were 5 down for 78 runs. However, some lusty blows by Dinesh Chandimal, Seekkuge Prasanna and Keemo Paul kept them in the hunt. But, the Giants prevailed over the more fancied Stars as they held their nerve in a run-fest.