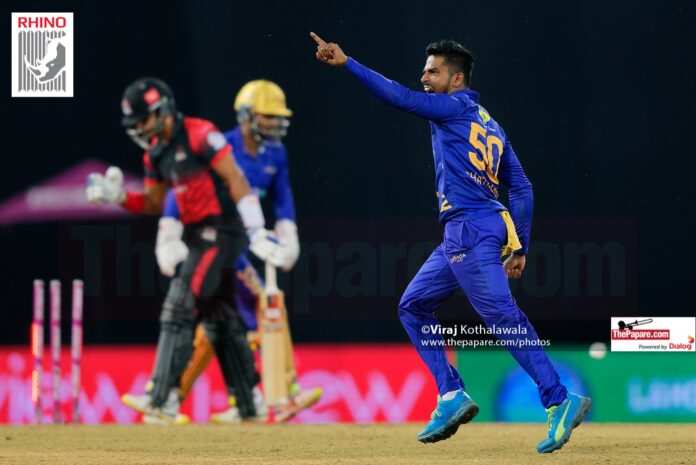 It was a battle of the Lanka Premier League table-toppers, Dambulla Giants and Jaffna Kings, but it turned out to be a complete anticlimax, with Kings ending victorious by 7 wickets and over 10 overs to spare.

Maheesh Theekshana continued his brilliance in the powerplay and Chathuranga de Silva did the mopping up as the Jaffna Kings bowled out the Dambulla Giants for 69 in the match that saw the Kings not only reach the top of the points table but also secure a place in the playoffs.

The Kings won the toss and elected to bowl; though the game saw a delayed start due to bad weather in Colombo, no overs were lost.

Theekshana has been one of the key weapons in Thisara Perera’s arsenal and he did the job once against, striking in the 1st over, removing Niroshan Dickwella and Sohaib Maqsood off consecutive deliveries. He then dismissed Nuwanidu Fernando off his next over, reducing the Giants to 9/3.

There was no respite for the men from Dambulla, as even though Theekshana was bowled out, Wanindu Hasaranga kept things tight on one end and older brother Chathuranga de Silva continued the destruction on the other.

At no point did the Giants look like they would post a competitive score, ending the powerplay on 32/4 and things just got worse from there as they slumped to 39/7 and eventually 69 all out.

They haven’t had the best of times against the Kings in the past, being bowled out for 110 in their previous game in LPL 2021, there too, Theekshana was the man who did the major damage.

The chase started off slowly, with Upul Tharanga struggling to get going, but once he was dismissed by Imran Tahir, the floodgates opened as the Kings’ management decided to float Wanindu Hasaranga up to No. 3.

The right-hander smashed Tharindu Rathnayake for 3 fours and a six and then took Tahir for 12, before being dismissed for 34 off 18 by Irishman Josh Little, who was impressive in his LPL debut.

With 5 wins in 6 games, the Kings have now booked their place in the final 4 with 2 games to spare, while the Giants too are still in a good position to make it through.