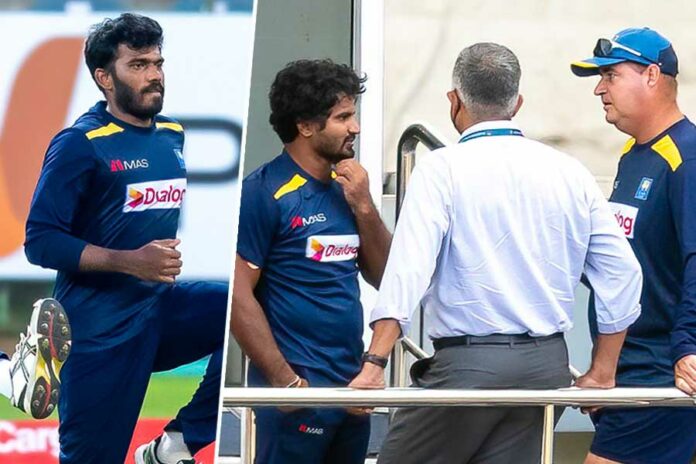 Sri Lanka will need to make at least one change to their squad for the upcoming ICC Men’s T20 World Cup 2021 following injuries to wicket-keeper batsman Kusal Perera and fast-bowling all-rounder Lahiru Madushanka.

Perera suffered a hamstring injury whilst batting in the 3rd T20I against South Africa on Tuesday, while Madushanka fractured his collarbone while fielding in the same match.

Perera underwent an MRI scan on Wednesday which suggested that he still could be in contention to play the 16-team tournament next month in the UAE and Oman. However, he faces a fight against time to be fit for the first match against Namibia on the 18th of October.

31-year old Perera played only two matches in the South Africa series having returned to from a shoulder injury and Covid-19. Despite batting in both the 2nd and 3rd T20Is, he did not take the field. He top-scored for Sri Lanka in the final game with a 33-ball 39 at the top of the order.

Having lost the T20I series, 3-0 at the hands of South Africa, Sri Lankan team left the bio-secure environment and will have 10-12 days of rest before assembling in the last week of September ahead of their two-match T20 series in Oman. Sri Lanka will play two games against Oman on 7th and 9th October, followed by two more official World Cup warm-up games on the 12th and 14th.

Madushanka, who played only his 3rd T20I on Tuesday, is definitely going to be ruled out of the competition since his injury require at least 6-8 weeks of rehabilitation. He was run-out for 1 during Sri Lanka’s dismal performance with the bat and did not bowl following his injury in the outfield.

Sri Lanka, the last team to announce their squad for the ICC Men’s T20 World Cup, can make any changes to their squad until the 10th of October.

Wicket-keeper batsman Minod Bhanuka, who was not named among the four travelling reserves, is the most likeliest candidate to come into the squad as a direct replacement for Madushanka and as a cover for Kusal Perera. Adding Minod Bhanuka will provide more batting options for Sri Lanka as well as a wicket-keeping resource.

The Islanders will not replace Perera from the squad since he is by far Sri Lanka’s best batter in T20Is – scoring 1416 runs in 52 games at an strike-rate of 132, ThePapare has learnt. If deemed fit, Perera could play at least the official warm-up games in the UAE even if he misses out the Oman games.

Mahela Jayawardena appointed Consultant to the Sri Lanka National & U19...