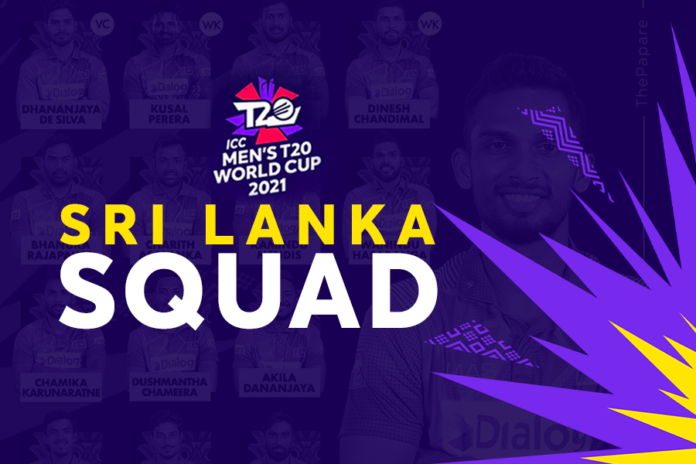 The 16-team tournament will be played in the UAE & Oman from 17th October to 14th November. ICC will allow all participating countries to make changes to their originally named squad, if necessary, until the 10th of October.

All-rounder Dasun Shanaka will lead the team with with Dhananjaya De Silva named as his deputy.

Kusal Perera and Dinesh Chandimal, have been named as the wicket-keeper batsmen while, young batting talents such as Avishka Fernando, Charith Asalanka and Kamindu Mendis will be expected to play pivotal roles with the bat.

The bowling attack will revolve around speedster Dushmantha Chameera and leg-spinning all-rounder Wanindu Hasaranga. Fast-bowling contingent will have the services of the experienced Nuwan Pradeep and Chamika Karunaratne while Lahiru Kumara and Binura Fernando have been named backups.

Maheesh Theekshana and Praveen Jayawickrama have been named as the men to support Hasaranga in the spin-bowling department.

Sri Lanka will battle it out with Namibia, Netherlands and Ireland in Group A of Round 1 while Bangladesh will feature in Group B of Round 1 along with Scotland, Oman and Papua New Guinea. The top two teams from each group will advance to the Super 12 stage.

If Sri Lanka and Bangladesh make it through the first round, they will retain the seedings of A1 and B1 respectively for the Super 12 stage. Therefore, if Sri Lanka qualifies for the main draw, their opponents will be the second-placed team from Group B, Australia, West Indies, South Africa and England.