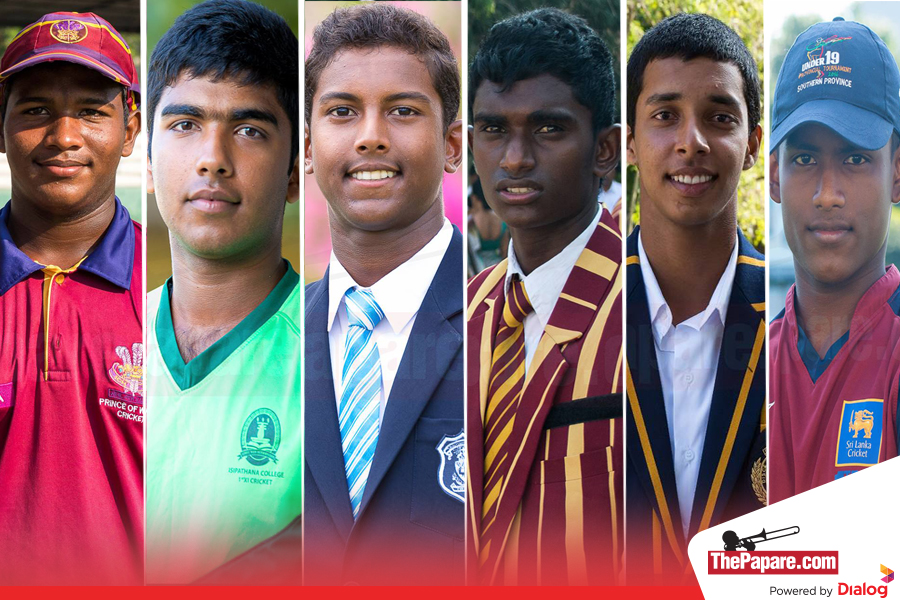 As the brand new under 19 schools cricket season has already started and is going great guns with most of the teams engaging in early-season traditional and tournament fixtures, we take a look at the respective captains of the 36 schools in the division 1 category.

In a series of three articles, we bring you a brief insight into each captain for the 2016/17 season.

17-year old Chathuranga, playing his third season, is one of the most talented opening batsmen in the current schools’ circuit. The left-handed wicket-keeper batsman from Moratuwa represented Sri Lanka U19s against South Africa U19s in June/July where he made a classic 81 in the first innings of the first youth Test which stands out as one of his most elegant knocks. He has valuable club experience as well, representing Air Force Sports Club in the SLC U23 division 1 tournament 2016.

The 17-year old left-handed wicket-keeper batsman took the spotlight last season when he amassed more than 1000 runs, leading Isipathana’s batting. His 270-ball knock of 204 against Lumbini College was the highest individual score of the season and caught the attention of the junior national selectors who drafted him into the Sri Lanka U19s squad for the home youth Test series against South Africa U19s.  With an ability to play all-around the wicket, Abeywickrama will be itching to stake his claim in the Sri Lanka U19s squad for the next ICC Youth World Cup to be held in New Zealand in 2018.

The most experience player in the schools’ circuit, Nirmal had the rare opportunity of playing 9 matches for Galle Cricket Club. He even made three half-centuries in the SLC Premier League Tournament 2015/16. Nirmal represented Sri Lanka U19s against South Africa U19s at home and was part of the squad which achieved a historic whitewash against England U19s in their own den. A classic right-handed wicket-keeper batsman with a pair of excellent hands and a good cricketing head on his shoulders, Nirmal will no doubt bring many victories for his alma mater.

This tall and lanky left-arm spinner will be playing his third season for the Josephians and has the distinct honour of leading a strong side. He was instrumental in St. Joseph’s success last season, taking more than 70 wickets. He started off his season as the captain with a match-bag of 11 wickets last weekend against St. Patrick’s College, Jaffna. Cooray concentrates on bowling wicket-to-wicket, bats lower down the order and plays his cricket with a lot of heart.  His leadership skills are phenomenal and he will look to bring several championships to Darley Road this season.

17-year old Samsudeen is a slow left-arm orthodox spinner and a third-year coloursman. His ability to take wickets at regular intervals will be a great boost for the Zahirians this season. This right-handed middle-order batsman is a no mug with the bat and will contribute whenever needed to his team. He was able to take 56 and 57 wickets respectively in the first two years he played 1st XI cricket.

In the 42nd Ananda-Nalanda one-day encounter in 2016, left-handed Anjula slammed an unbeaten 100 to help Ananda win the trophy. A hard-hitting middle order batsman was the top run-scorer last season with more than 700 runs and was able to capture almost 50 wickets with his right-arm seamers. A decent fielder at any position, Anjula is one of the few genuine fast-bowling all-rounders in the schools’ circuit.

The tall and lanky right-arm medium pacer will lead Royal College in the forthcoming season. Playing his 3rd year, Vithanage played the last two ‘Battle of the Blues’ big-match encounters against S. Thomas’ College. The left hander had a modest 2015/16 season, scoring over 450 runs and has taken close to 30 wickets. His ability to move the ball both ways will be a great boost for the Royalists.

The 18-year old left-handed middle order batsman and right-arm leg spinner has been appointed as the first XI cricket captain of St. Joseph Vaz College, Wennappuwa. He is renowned to be a ‘Big Match’ player and will give his 200% for the sake of the team. As a fourth year coloursman, Ranathunga has taken over 120 wickets in the past couple of seasons.

Dual sports’ champion, Athulathmudali is a national age-group swimmer and prolific cricketer for Wesley College. He played a big role with the bat in bringing Wesley back to the top division. The top order batsman made bucket-loads of runs last year and is known as a safe fielder anywhere in the field.

Third year player, Welihinda will have a huge task ahead of him leading an inexperienced Mahinda College outfit. The right-handed middle order batsman is also a chess player and had a successful 2015/16 season scoring more than 500 runs. A silent but smart character on and off the field, Welihinda possess a wealth of cricketing knowledge.

4th year coloursman, Imantha is an experienced right-arm off-spinner and a left-handed batsman. He took about 75 wickets in the last two seasons and has played U23 cricket and division III cricket for Singhe Sports Club in Ambalangoda. The 17-year old has had many experiences as captain from the smaller age groups and will be looking to make his mark this season.

Third year coloursman, Udayanga is an opening batsman and a right-arm medium fast-bowler. He has also represented Southern Province and played division III cricket. Known to be a gritty player, Udayanga is highly rated among his peers.