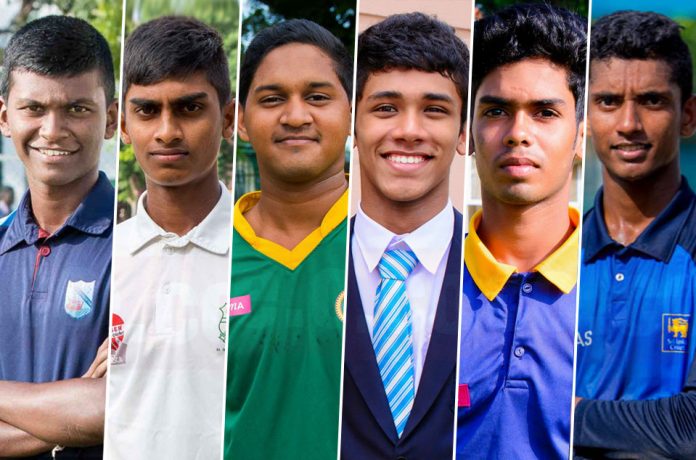 With the Schools 1st XI cricket for the 2018/19 season underway, we take a look at the guys who will be leading their respective teams in a 3-part series.

Abhishek is a right-handed batsman and is also capable of squeezing in a bit of off-spin here and there. He first broke into the Richmond 1st XI squad at fifteen during the 2015/16 season. Since then he has been an active contributor to the team’s success. Being a reliable middle-order batsman, last season was the best for Abhishek as he made 466 runs with a century and four fifties at an average of over 35.

3rd year coloursman, Jehan Fernandopulle, a prominent top-order batsman and handy part-time off spinner, will lead the Joes this year. Fernandopulle’s debut was in the 2016/17 season in which he averaged a solid 32.40 as a rookie in 1st XI cricket. He had a rough time last year, nursing a back injury for most of the season. But, his experience and the performances in the previous seasons have earned him the leadership and the faith of the Joes.

Navodh Yohan Peiris will be representing his alma mater for the 3rd year in the 2018/19 season. Being a left-handed middle-order batsman and a left-arm spinner, Peiris adds immense balance to the team. He has 2 centuries to his name in first XI cricket and had been a prominent member of the team for the past two years. Peiris also represented the North Western Province in the U19 provincial tournament this year.

Thisara Dilshan has been representing Devapathiraja at the U19 level for the past 5 years, this being his 6th year. This is going to be a very challenging season for Devapathiraja as they will play in Division one this year after receiving promotion last season. Being the team’s leading paceman, Thisara is also expected to strengthen the middle-order this year, batting at number 6 or 7. The all-rounder has over 1500 runs and has about 45 wickets in 1st XI cricket.

3rd year coloursman Dushan Fernando has been handed the captaincy duties this year for Lumbini College. The wicket-keeper is a composed right-handed batsman and a sharp act behind the stumps. He had a vibrant season last year and played some vital knocks holding the innings together in the middle order. Dushan has experience in minor domestic tournaments too. The gloveman is well known for his ability behind the stumps and is regarded as one of best wicket-keepers for Lumbini in recent times.

4th year player Sachintha Chamith has been trusted with the captaincy this year by Gurukula College. The left-arm spinner broke into the 1st XI squad when he was just 14 years of age back in 2014. Though he got only two games that season, Chamith has been a regular member of the playing XI of Gurukula since the 2015 season. He is known for his fifer in his Big match debut and is also praised by coaches for his excellent economy in 1st XI cricket (2.90). Chamith also averages a brilliant 18.88 in all his 1st XI matches.

The U19 batting sensation, Nuwanidu Fernando, will lead the Sebs in this year’s tournament. The tall right-hander is playing his 4th season of 1st XI cricket. Nuwanidu possesses a lot of experience, playing for Panadura SC in first-class cricket, provincial U19 and U23 tournaments and of course representing the country in the Youth World Cup. He had a great run at the recently concluded Youth Asia Cup where he piled up 195 runs at a staggering average of 65 with a century and a half-century to his name. With a lot of expectations on him, Nuwanidu will definitely be a player to keep your eye on this season.

A solid middle-order batsman and a very useful leg spinner, Manahoran Pavithran, leads St. Sylvester’s College this season. Pavithran is a 4th year player and has been a prolific cricketer for St. Sylvester’s College, Kandy over the years. He had a very successful season last year as he made over 400 runs, averaging just under 30 and also picked up 16 wickets.

4th year coloursman, Amoda Vidanapathirana was impressive in just his first year in Division 1 cricket itself, since St. Thomas’ was promoted to the top tier last season. He is a very capable middle-order batsman and was instrumental in the last year’s campaign, scoring over 500 runs at a decent average of 32.12 including a century and 2 fifties. Amoda was also a member of the Southern Province team in the Super U19 provincial tournament 2018.

The 17-year-old has captained St. Anne’s College in Under-13, Under-15, Under-17 and now, the Under-19 level. St. Anne’s College will play in the Division I tournament for the first time since their demotion in 2010 giving Kavindu the privilege of leading the team in the top tier after 8 years. The right-arm leg spinner has also been a part of the provincial team at the U15 and U19 levels. Even though he did not have a great run last season, Kavindu is identified as one of the major assets from St. Anne’s college. A lot of trust is being placed in his potential though his numbers haven’t been exceptional.

Charith Harshana is playing his last year for St. Servatius’, Matara. The left-arm spinner is known for his accuracy and the ability to tie up batsmen at one end. His economy of 2.93 in schools Division 1 cricket is evidence to that statement. He is a very experienced campaigner with this being his 5th year for St. Servatius’. Harshana, with Shashika Dulshan on the other end, will be invaluable to the attack.

The right-handed opener is a stylish act at the crease and is also capable of delivering some very useful right-arm off spin. Iranga is in his 3rd year for President’s and had a terrific season last year scoring over 500 runs at an average of over 34 including 2 centuries and 2 fifties. He also was selected to represent the provincial U19 team in the years 2016 and 2017.