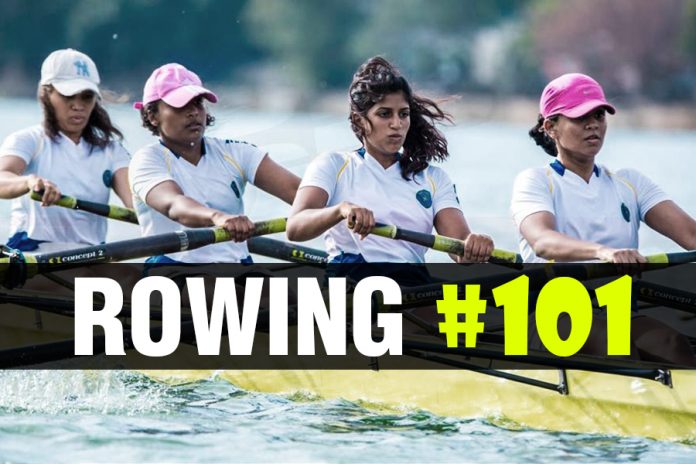 Although it looks like a sport that utilizes only the upper body, rowing uses the strength and force of the whole body. It’s a great aerobic workout.

Rowing demands endurance, strength, balance and mental discipline, so don’t be fooled as it could look graceful, elegant, and sometimes effortless when done well. Though It may seem like the upper body does most of the work, the strength of the rowing stroke comes from the legs, which is why rowing is known as one of the few athletic activities that involve all of the body’s muscle groups.

History of the sport

It all started when taxi and ferry services were provided to the public on the River Thames in London in the early 1700’s. Gradually, this simple mode of transportation changed forms when these watermen professionally began to compete against each other.

During the 19th century these races were to become numerous and popular, attracting large crowds. Prize matches amongst professionals similarly became popular on other rivers throughout Great Britain in the 19th century, notably on the Tyne.

In America, the earliest known race dates back to 1756 in New York. Towards the end of the 18th century amateur competitions in England had already begun. Although there’s not much about the races and competitions from that era, it is known that the Monarch Boat Club of Eton College and the Isis Club of Westminster School were both in existence in the 1790s. The Star Club and Arrow Club in London for gentlemen amateurs were also in existence before 1800.

At the University of Oxford races were first organized in 1815, while at Cambridge the first recorded races were in 1827. Brasenose College beat Jesus College to win Oxford University’s first ‘Head of the River’; the two clubs claim to be the oldest established boat clubs in the world. However, the Boat race between Oxford University and Cambridge University first took place in 1829, and was the second intercollegiate sporting event. The interest in the first boat race and subsequent matches led the town of Henley-on-Thames to begin hosting an annual regatta in 1839. The prestigious rivalry between the two universities still lives up to date and is being followed by a large crowd even now.

Positions and the Crew

Rowing boats are called “shells”, and they’re made of lightweight carbon fibre. The smallest boat on the water is the single scull, which is only 27-30 feet long and only a foot wide. Eights are the largest boats at 60 feet and a little over 200 pounds. Rowers use an oar to propel their shells. Oars vary from position to position, Sweep oars are longer than sculling oars.

Similar to many other sports, Rowers are categorized by gender, age and weight. Events are offered for men and women, as well as for mixed crews containing an equal number of men and women. There are junior events for rowers under 18 and there are masters’ events for rowers 27 and older. There are two weight categories: lightweight and open weight

Sweep rowers come in pairs (2s), fours (4s), and eights (8s). Scullers row in singles (1x), doubles (2x), and quads (4x). Sweep rowers may or may not carry a coxswain (the person who steers the boat). All eights have coxswains, but pairs and fours may or may not. In all sculling boats and sweep boats without coxswains, a rower steers the boat by using a rudder moved with the foot.

That’s the Rowing 101 for you, with the rowing season just around the corner, a basic knowledge about this great sport could come in handy. Stay logged with ThePapare.com for the latest news, fixtures and updates.