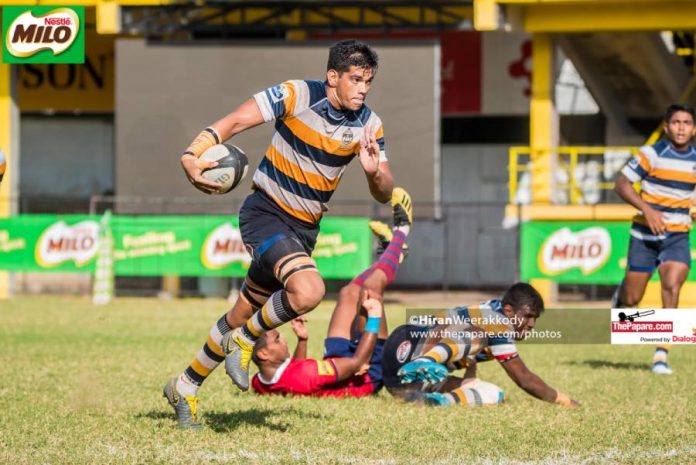 Defending Champions St. Peter’s College knocked out the 2019 Plate Champions Kingswood College 53 (8T,5C,1P) points to 12 (2T,1C) in the 4th quarterfinal of the Milo President’s Knockout Trophy worked off at the Royal Complex earlier today. With this victory St. Peter’s booked their semifinal spot and now will face Isipathana next Saturday.

Asiri Senevirathne started the proceedings of the last quarterfinal of The Milo President’s Knockout Trophy 2019 as three teams have already booked their places in the semis with Vidyartha & Wesley College receiving free passes into the semi-finals as Royal College and S. Thomas’ College withdrew from the tournament while Isipathana yesterday managed to edge past the Josephians 19 points to 17.

St. Peter’s began this encounter in superb style as Shenol Silva opened up the Kingswood defence and was brought down near the 22-meter line and quick hands by the Peterites managed to send Nizran Nilar over the line to open up scoring for the Bamba brigade (SPC 05 – 00 KCK)

Peterite backs were on song as they continued to pile on the pressure towards the Randel Hill Boys as they scored twice in quick succession as Dilshan Madushanka destroyed the Kingswood defence and opened up space to Shenol Silva to score under the post. A few phases later Sathmina Perera ran through the Kingwood defence from their own half to score the third try for the Peterites inside the first ten minutes. (SPC 17 – 00 KCK)

Kingswood finally put some pressure on the Peterites with their heavy forwards putting on phases after phases and leaked a penalty from St. Peter’s. Asiri Senevirathne took a quick tap and went past the disorganised Peterite defence and made a timely pass to Dinal Ekanayake to score in the corner. Hirusha Sampath made no mistake from the touch line to make it a perfect seven. (SPC 17 – 07 KCK)

Kingswood discipline folded under pressure as Gayan Kumara saw yellow and St. Peter’s went in for a rolling maul. Kingswood struggled to hold off the Peterites as the skipper Bilal Hilmy found himself at the tail of the maul to crash over for the fourth try of the evening.

Kingswood managed to score another try through their backs when Asiri Senevirathne distributed the ball to the wider channels and Dinal Ekanayake found an overlap to score his second and to keep his team alive in this quarterfinal.

Read More : Sanctions await schools that pull out of Knockouts

In the last play before the break Kingswood skipper Milan Weerasinghe made a high tackle giving unecessary  penalty and the Peterites opted for the three points as Thenuka Nanayakkara slotted home from close range to increase the lead for the Bamba brigade.

First ten minute of the second half was a stop start and Kingswood lost the fullback Hirusha Sampath as he was sent to bin for a reckless tackle. The Peterite forwards commenced the usual proceedings by patiently playing out phases of pick and drives and Nizran Nilar powered himself over the white wash to score his second. Nanayakkara quickly added the extras from close range. (SPC 32 – 12 KCK)

Kingswood was hindered with self-inflicted disciplinary errors as this time Thumula Waligampola was shown the marching orders to bin for an intentional knock on. The Peterites went into overdrive as Thenuka Nanayakkara scored twice within three minutes scoring his first try under the post and he ran around the Kingswood sweeper to score his second. Nanayakkara made no mistake from the tee to convert both of his tries. (SPC 46 – 12 KCK)

Peterite lock Nizran Nilar barged his way over the line to score his hat-trick as well as the final try of the game as Sathmina Perera took over the kicking duties from Nanayakkara and slotted an easy kick which sealed their birth in the semifinal.(SPC 53 – 12 KCK)

Sanctions await schools that pull out of Knockouts