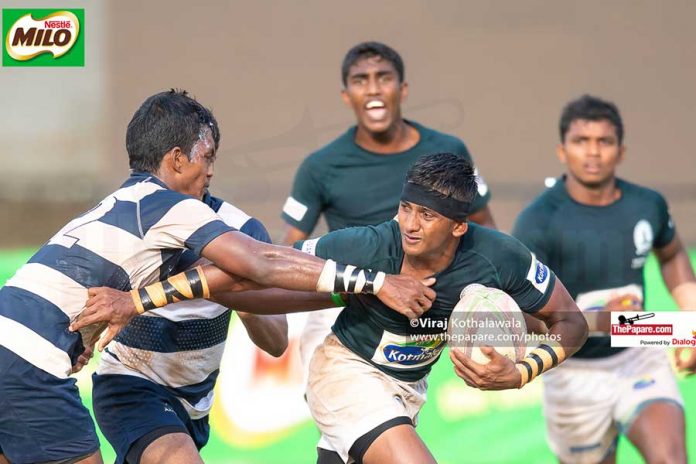 An all-round performance from Isipathana College ensured that they booked a place in the Semi-final of the Milo President’s Knockout Trophy 2019 as St. Joseph’s College went down 19 (3T,2C) points to 17 (2T,2C,1P) in the 3rd quarterfinal worked off at the Royal Complex earlier today.

The Milo President’s Knockout trophy 2019 officially began today. The league title winners Royal College along with S. Thomas’ college opted out of the tournament and as a result Vidyartha and Wesley College received walkovers and went straight to the Semi- Final.

Sanctions await schools that pull out of Knockouts

Rashean Gunawardena kicked started this crucial game for St. Joseph’s but Isipathana dominated possession early in the game. The Green Machine gave away a few penalties during the early stages and  Santhush Algama obliged for a 40 meter three-pointer to open up the scoring for Joes. (IC 00 – 03 SJC)

Isipathana continued to play an attacking brand of Rugby as Ashan Gunarathne broke the Joes defense with a superb run but was finally brought down near the 10-meter line. Isipathana continued to use their backs as the Josephians struggled to keep up with the pace. Ramitha De Silva found an overlap and went over for the Green Machines and Manelka Ruberu made no mistake from the touch line to make it a perfect seven. (IC 07 – 03 SJC)

Isipathana continued play the fast brand of rugby as the Josephians struggled with their defense and Pathana began to find a few gaps and gained valuable meters as the try scorer Ramitha De Silva went around a Joes’ defender and then he made a superb inside side step to go over the line for his second. Manelka Ruberu slotted home from close range to increase their lead.

Joes had to reply quickly and they did it when their forwards kept on going with the pick and drive as Shevon Gregory finally managed to touch down, powering himself over three Pathana defenders to cut down the deficit for the Josephians. Santhush Algama pierced the posts to make it a four-point game going into half time.

Isipathana kept pilling on the pressure but unwanted handling errors cost them a few try-scoring opportunities. The Green Machine lost their replacement forward Manoj Gautham as he was sin binned for collapsing the maul and the Joes made the maximum out of the numerical advantage. They played more than twenty phases of pick and drives and Pathana continued defend the heavy Josephians forwards but they couldn’t stop the big man Shevon Gregory as he found the white wash for the second time. Algama pierced the posts from right in front to further increase the lead. (IC 14 – 17 SJC)

The second half was a stop start affair as more errors kept on coming, the Green Machines woke up and scored through a rolling maul for which all 15 players joined in to push the Josephians behind white wash as Venura Kodagoda found his way to the try line. (IC 19 – 17 SJC)

In the final move of the game St. Joseph’s opted for a 55 meter three pointer to win the game but the kick from Algama had direction but not the distance as Isipathana secured a nail-biting victory and marched forward to the Semi-Final.

Can the Green Machine spoil the Peterite dream?