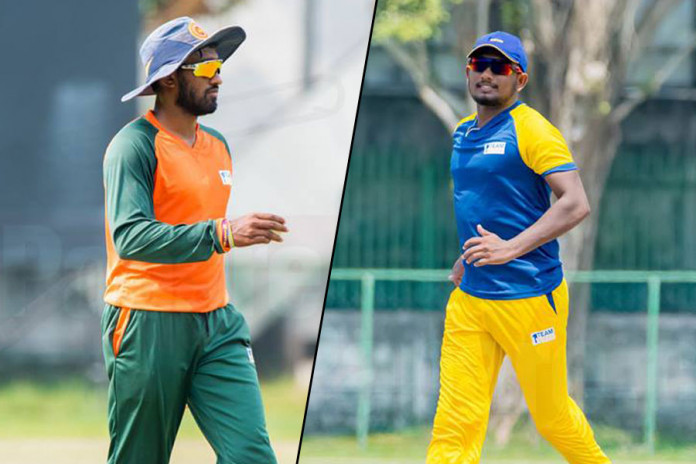 Kegalle District and Colombo District bowlers ran through the Kandy and Mannar batting line-ups to set a final between Kegalle and Colombo in the Inter District One Day Tournament.

Kandy District won the toss and surprisingly elected to bat first on a bowling friendly surface at CCC grounds.

The decision soon backfired on the Kandy batsmen as their innings capitulated under immense pressure from the Kegalle bowlers. Excellent bowling left the Kandy batting in tatters, restricting them to a meer 96 in 29 overs.

Prabath Jayasuriya was the pick of the bowlers with 3 wickets to his name conceding 17 runs in 9 overs with 2 maidens while right arm paceman Ishan Jayaratne, the bowler who began the rout, ended with 2 for 16 in 7 overs.

Kegalle  began their reply in shaky fashion as both openers was sent packing for one run each within 6 overs as the score read 24.

Stepped in Hashan Dumindu who stroked a master-class half century off 56 balls as he safely guided Kegalle District to the final.

Angelo Jayasinghe provided vital support with 24 runs off 28 balls with a single four.

Sachithra Senanayake (1/7), Tharindu Ratnayake (1/21) and Jeffrey Vandersay (1/25) all managed a single wicket apiece but it was insufficient as Kegalle ran out winners by 7 wickets with 30 overs to spare.

Winning the toss and electing to bat proved to be a bad decision for Mannar as their batsmen failed to do justice.

Three ducks in from the first six batsmen meant the Mannar batting was in disarray early on in their innings. Lahiru Milantha along with Roshan Silva scored 16 each while Lahiru Thirimanne scored 10, coming in at number three.

With their batting succumbing to accomplished bowling of Colombo District, Akshu Fernando came in and scored a measure innings of 31 of 60 balls with two fours.

Vishwa Fernando was the standout bowler for Colombo with figures of 3 for 23 while the Lahiru duo of Lahiru Gamage (2/18) and Lahiru Madushanka (2/19) picked four wicket between each other.

Chasing the below par target of 131, Malindu Maduranga aged 19 and captain Ashan Priyanjana scored 55 apiece, paving the way for Colombo to win by 7 wickets and with it setting up a final showdown with Kegalle to contest for the Inter District One Day Tournament Championship.

Udith Madushan was the only bowler who made a significant contribution with the ball for Mannar as he managed to pick 2 for 32 in 7 overs.

Kegalle District is set to take on Colombo District in the final of the Inter District One Day Tournament on April 2nd at P.Sara Oval.