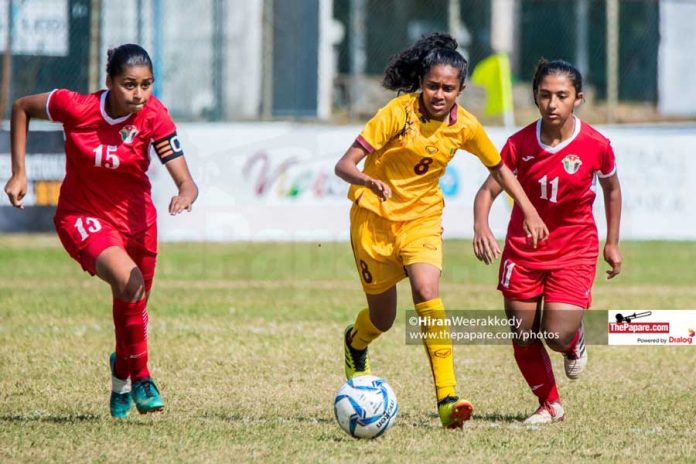 Jordan put 7 goals past a hapless Sri Lanka in their second game of AFC under 16 first round qualifying played at the CR & FC grounds.

Sri Lanka scored twice but lost 4-2 to Guam in their opening..

From the offset Jordan were on the ball and in possession, threatening to score from every attacking move. Their forwards and midfielders combined well and worked in creating openings.

Sri lanka on the other hand were unable to get out of their own half for most of the first half. The back line kept kicking away to clear their lines and the mid fielders kept losing procession, making life easy for Jordan.

Sankalani Bandara who came into this game in goal was kept busy. She did well to keep the ball at bay with some good collections from long range efforts.

Jordan’s forward trio of Aleen, Lina and Enas were a constant menace and did not give any respite to the Sri Lankan backs.

It was Enas along with captain Joud and Zaina Hassan who controlled the game. Their defender Lujain Yaseen, playing well up front, made a barrage of long distance attempts.

After 40minutes of holding on, it was a long range effort by Zaina Hassan which broke the deadlock. Immediately after Lina made it 2-0 with some nifty footwork assisted by Enas.

The second half display from the Lankan lasses was more commendable in attack as they attempted to create some shots, while trying to keep possession in their own half at the early stages.

6 minutes after the break Enas got the first of her three goals for the evening with an east tap in to the goal after a good passing move.

3 goals down, the Lankan heads were down and Jordan capitalized with goals coming in from Enas, Aleen and substitute Shaima Al Hadidi.

Sri Lanka did apply some pressure looking for a consolation which never arrived.

Sri Lanka take on China in the next game while Jordan will face off against Guam.

In the earlier game China put in a superb display by hammering Guam 20-0 with goals coming in from every angle.

Half time ended 8-0 to China with Guam players clearly struggling in the morning heat.

After the break it was a procession of goals, with Guam down to 10 girls as a result of an injury and no substitutes available. China scored 12 more unanswered goals to end the morning with a 20-goal feast.