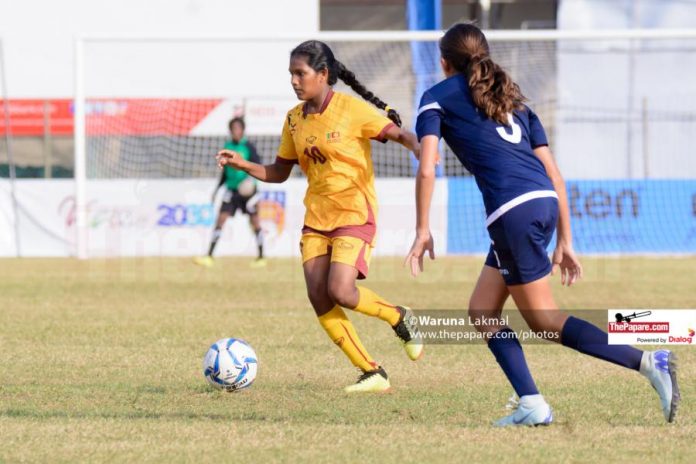 Sri Lanka scored twice but lost 4-2 to Guam in their opening Group A encounter in the AFC U16 Women’s Championship 2019 Qualifiers played at the CR&FC Grounds.

Guam got the first major chance of the game when their number Elise Han broke through the defense and cut the ball back into the box, but the final shot was blocked away for a corner.

Guam got the breakthrough in the 10th minute when Elise Han attempted a lofted cross into the box but the ball ended up looping over the keeper into the back of the net, giving Guam the lead.

Sri Lanka got a clear opportunity when the Guam goalkeeper was caught on the edge of the box after receiving a back pass and was put under pressure by the onrushing Lankan forward, but she cleared the ball just in time.

Sri Lanka seemingly found their groove towards the middle of the half as they started applying pressure onto the opposition defense.

Guam asserted their dominance as they doubled their advantage through Jadyn Riley who took a powerful strike from the edge of the box and beat Sri Lankan keeper J. Jethunsika, who should have done better.

Sri Lanka’s first attempt on goal came all the way in the 40th minute when a freekick was struck into the opposition box before the rebound shot by Pasindi Dassanayake was blasted well over.

Sri Lanka’s Ragudas Kirushanthini right at the death of the first half got the ball off a poor goal-kick and dribbled into the box and scored to cut the deficit down to 1 goal.

Guam started the second half as dominantly as the first. Riley too picked up from where she left off as she scored again early in the half to make it 3-1 as Guam attempted to crush Sri Lanka’s hopes of a comeback early on.

The action continued with Guam going onto adding their 4th when a ball crossed into the box was toe-poked into the back of the net by Captain Teria Bernadette.

Sri Lanka missed out on a semi-final place in the SAFF Suzuki Cup 2018 after Maldives won the coin toss. Sri Lanka and Maldives…

Sri Lanka capitalized on another goalkeeping error with Kirushanthini pouncing on the opportunity and bagging her and Sri Lanka’s second goal of the match. Captain Uthpala Jayakodi put on a brilliant performance in midfield, taking command of her area and continuing on despite taking some painful knocks.

Jordan and Uzbekistan kick off with goalless draw

Jordan and Uzbekistan played out a 0-0 draw in the opening match of Group A in the AFC U16 Women’s Championship 2019 Qualifiers.

Jordan dominated the game having quite a few chances throughout the 90 minutes, but never being able to get the final telling touch. Uzbekistan’s major chance of the match resulted in striking the crossbar.