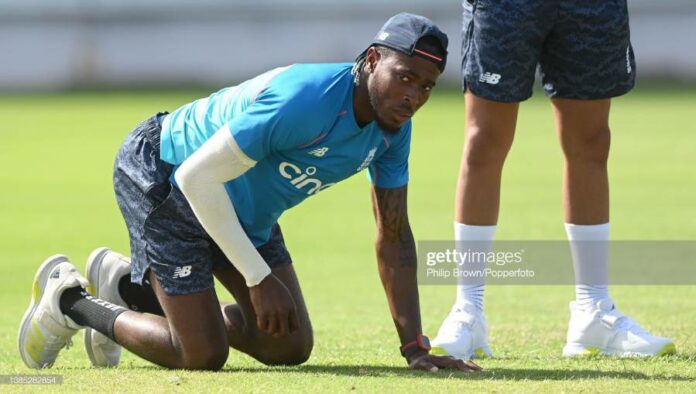 England speedster Jofra Archer’s comeback has been halted by yet another injury, a stress fracture to the lower back.

Archer, who last played competitive cricket in July 2021, was eyeing a return with Sussex in the Vitality Blast in late May. Unfortunately, those hopes have now been dashed after the pacer suffered yet another injury on his comeback trail that has ruled him out for the remainder of the season.

No timeframe has been set for his return. A plan will be determined over the coming days following a specialist opinion.

The 27-year-old has been battling injury issues for the last year and has had to undergo three surgeries in a span of 14 months – two to repair his elbow and one on his hand to remove a shard of glass. He last appeared in England colours during their tour of India in 2021 where he was part of the Test and T20I squad.

Since then, he has been rehabilitating and was even with the England squad that travelled to the Caribbean for Test and T20I series. He opened up about his injuries and battles fought during recovery in his column for the Daily Mail.

“In a situation like this, when you are forced to have operations, you do think about whether you are going to play cricket again, whether you’re going to play all formats even,” Archer wrote. “But the ECB gave me the assurance and peace of mind that they wanted me around for a long time.”

“At one point I thought I was going to lose my [England central] contract when things weren’t going well, but now I have confidence about what the future holds. Part of that is down to them not rushing me back.”

Archer has played less than fifty international matches for England but made a lasting impact in them. He was the highest wicket-taker for England and the third-highest overall with 20 scalps in the 2019 ICC Men’s Cricket World Cup. He etched his name in history, bowling the Super Over that won England their first-ever 50-over World Cup.

He followed that up with a brilliant performance in the 2019 Ashes that saw him scalp 22 wickets in four matches, only bettered by Pat Cummins (29) and Stuart Broad (23) who both played a game more.

England are currently on the cusp of a new era, with Rob Key appointed as the Managing Director of Cricket. With him, a host changes have come along – Ben Stokes was named as the new Test captain while Brendon McCullum was appointed as the head coach in the red-ball format.

Matthew Mott, the former head coach of the Australia women’s team that won the ICC Women’s T20 World Cup in 2018 and 2020 and Cricket World Cup in 2022, has been appointed the white-ball coach. With two big tournaments in the next two years, one of which England are defending champions in, they will be hoping Archer is fit and firing soon.