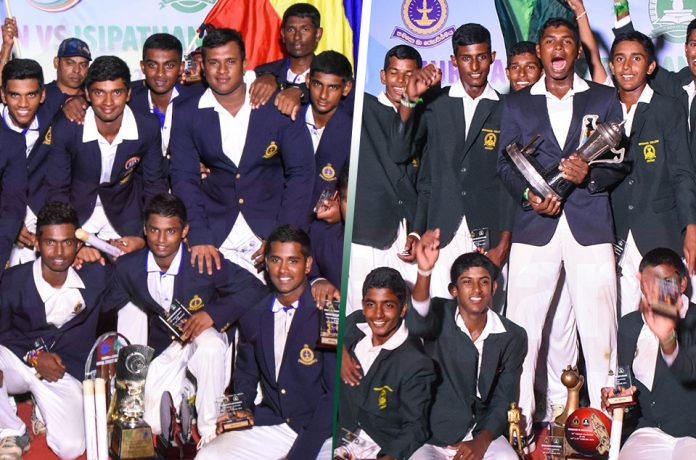 The 55th Battle of the Brothers between Thurstan College and Isipathana College concluded in an exciting draw on Friday. Isipathana College, being given a target of 254, ended the final day at 153 for 7 at the SSC grounds.

Earlier on day two, Isipathana resumed play with their most experienced batsmen Sanjula Abeywickrama and skipper Ayana Siriwardane at the crease. With four wickets down for 120, Isipathana had to overcome their first hurdle of reaching 214 runs, to avoid a follow on. Both Sanjula and Ayana looked positive early on as both of them reached their half centuries in the first hour.

Just when they tried to up the ante, skipper Ayana hit a skier straight down the throat of the extra cover fielder. Sanjula Abeywickrama followed shortly after scoring 69 runs and both those wickets were taken by Sawan Prabash.

The tail fell apart for Isipathana College and they found themselves reeling at 201 for 9 at the end of their allocated 60 overs. Thurstan College came into bat in the second innings with a lead of 113 runs. They started off slowly and got to the lunch break without loosing any wickets.

Second session saw Thurstan College accelerating, aiming for a declaration before tea. Yeshan Wickramarachchi scored a quick cameo of 32 off just 23 deliveries. A few more cameos down the order for Thurstan saw them reach 140 for 5 in 23 overs, when they finally decided to declare.

With a target of 254 to get in 54 overs, Isipathana College came out with a very negative mindset. The two openers, Sanjula Bandara and Thevindu Dickwella kept on presenting the dead bat to the ball. The pair added 65 for the first wicket, when Sanjula after scoring 27 off 86 balls, got cleaned bowled by Janushka Fernando.

He was shortly followed by Thevindu Dickwella for 27 and there on Isipathana College went into defensive mode. Sanjula Abeywickrama and Leshan Amarasinghe tried to defend through the remainder of the day but a sudden rush of blood in Leshan saw him hitting one straight to midwicket. He was shortly followed by Khaliq Amath who was promoted up the order ahead of skipper Ayana Siriwardane.

Amath’s stay only lasted 2 deliveries and he was replaced with Ashen Gunawardane. Sanjula and Ashen put together a quick fire 42 to bring the target down to 138 off just 20 overs. The dismissal of Ashen caused another collapse in the Isipathana batting order.

Skipper Ayana who did not bat up the order came in at no 7 and lasted only 2 deliveries as he top edged a slog sweep to the bowling of Janushka Fernando. The green army were surely feeling the heat and with the wicket of Sanjula Abeywickrama and more than 15 overs remaining, really gave an opening for Thurstan College.

With the light running out, Thurstan tried to push through as many overs as possible but it ultimately proved not enough as the Umpires called off play at 10 minutes past 6 pm. It was an exciting draw at the end of day and clearly Thurstan College would feel proud with their performance which would boost their confidence going into the limited overs encounter on the 4th of March at the P Sara Stadium.