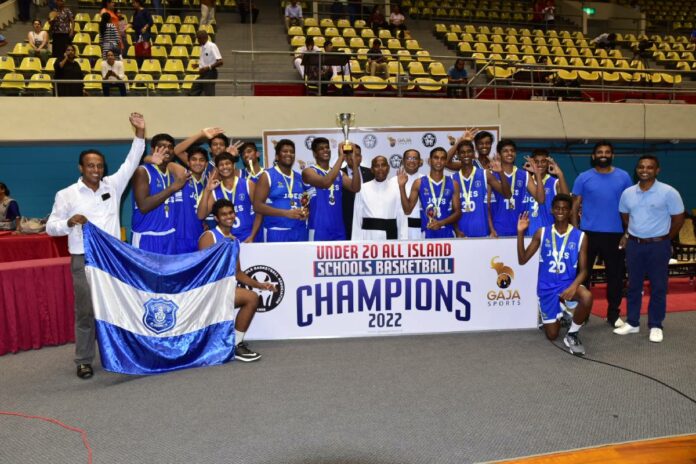 The ‘A’ Division Boys’ Under 20 Schools Basketball Championship came to an end with St. Joseph’s College beating Royal College 52- 68 in the final; Joes Skipper Shehan Fernando led his team to their 3rd title.

Both teams walked into the final unbeaten. St. Joseph’s College closed the first quarter with a comfortable lead of 15 points. Shehan Fernando started the score board with a shot beyond the arc and Keith Costa and Divine Valerian continued the momentum for St. Joseph’s College. Nevertheless, Reid Avenue boys managed to find ways to drive in and score a couple of layups in the first quarter.

In the second quarter Royal College did come back with an intense defensive strategy and managed to steal a couple of passes from Joes, converting those into points and cutting the deficit. Skipper Yuganan Baskaran acted as the power source for Royal College throughout the second quarter and continued to do so till the final buzzer. Joes went into the half-time break leading 31-18.

Royal College picked up their game further in the third quarter as they came very close to tying things up early into the 2nd half. Abhagya Gajamange broke the momentum of Royal College by swishing the layups and hitting mid rangers and the Josephians finally found their rhythm.

The physical advantage of SJC boys kept them on the top the game as their post players positioned themselves in the correct spots, which helped them to grab the offensive rebounds and bounce them back into offensive plays.

Adding another 21 points in the final quarter with a last second 3 pointer, St. Joseph’s College sealed the deal and clinched the Championship title once again under the leadership of Shehan Fernando.

Sri Lanka victorious over Tonga in a three-point thriller