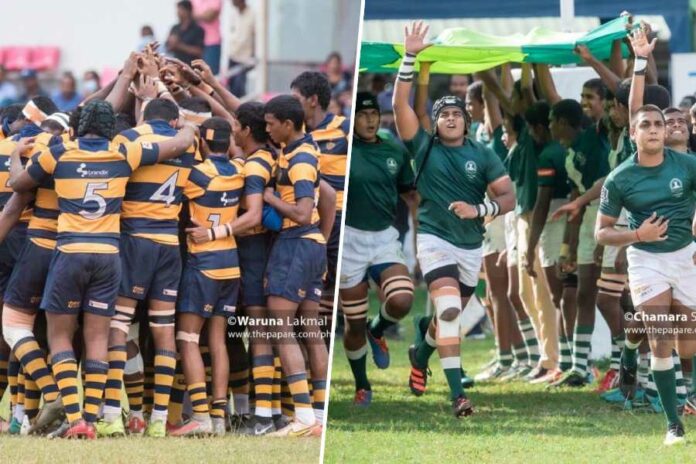 After seven weeks of exciting Dialog Schools Rugby League action which had many nail-biting thrillers and heartbreaks, we are down to the all-important final clash of the season between Isipathana College and Royal College on the 14th of August at Havelock Park to decide the League Champions of 2022.

In an important fixture of this magnitude, nothing less can be expected from the Tuskers of Royal, the reigning champions, who are looking to stamp their authority for the fourth consecutive time, whilst the unbeaten Green Machine of Isipathana College are waiting to lift a league title after 2016.  More importantly, this game is also played for Major Milroy Fernando Trophy.

The stakes have been doubled for this clash and the stage is set for an evening to remember for all diehard rugby fans in Sri Lanka. These two schools have produced some of the best rugby players ever to lace up their boots and wear the Sri Lankan jersey and they have also produced some of the most gut-wrenching and heart-stopping action ever in the Sri Lankan schools’ rugby circuit.

After 30 encounters in the past, Isipathana College have a slight upper hand when it comes to the historical data for this trophy as they have won it 14 times while Royal College are just 3 wins behind with 11. The competitiveness of this head-to-head tally is further proven by the 4 draws that have been registered over the years.

In the first encounter played for this trophy in 1986, Isipathana emerged victorious 11-9. In the very next year, in 1987 the score line read 13-13. Royal laid their hands on the trophy for the first time in 1988 after a convincing 24-9 victory. The last time these two fierce adversaries met was in 2019 and Royal College walked out with a 19-6 win.

After 6 matches, unbeaten Isipathana lies on top of the table with 32 points and Royal after the same number of matches are on 28 after their only loss came at the hands of their arch-rivals Trinity in the first round.

Hypothetically, assume that Royal score 3 tries and converts all three of them, whilst Isipathana score 4 unconverted tries. Then, the scores would read 21-20 in favour of Royal. In that case, Royal will not be league champions because Isipathana will be 34 points, while the Royalists will end on 33 points in the table.

For Royal, if they score 4 tries and register a win, then they will be crowned league champions irrespective of Isipathana claiming both their losing bonus points. Because, if both teams end up on 34 points, the tiebreaker would be the head-to-head clash. So, there’s a lot at stake for these two teams in this all-important league decider.

Characteristically, Isipathana have dished out some excellent running rugby by their backs throughout the season. However, some of the forwards such as hooker Venura Sangeeth Kodagoda, skipper/number eight Dahan Wickramarachchi and flanker Tharindu Wewalpandith have stood tall for the lads from Havelock Town. Isipathana will be hoping that Wickramarachchi can take the field after he missed out on the Joes game due to an injury.

In the backline, playmaker/fly half Naveen Kanishka will be pivotal in their plans to direct traffic along with full back Malith Mihisara and winger Rinesh Silva, who are both dangerous runners with the ball in hand. Silva’s kicking from the tee will also be crucial towards the result for Isipathana.

When it comes to Royal College, explosive center Kaveen Sasanga has been on top of his game throughout the season with 5 tries to his name. He is expected to lead the team in this clash as well and will get plenty of support from scrumhalf Hasnaka Higgoda, fly-half Thivain Perera and full-back Nabeel Yahiya from the backline.

But the biggest threat for Isipathana College will be the Royal College’s rolling maul. The rolling maul worked out perfectly last weekend against Wesley, resulting in three tries and their forwards, especially the likes of Danuja Samanaratne, Abdellah Yousuf, Rahil Wijesekara and Navin Perera are good in defense as much as their potent attacking game.

The Sunday’s clash will be a clash of the titans, a tussle for greatness, a battle for the crown, you can name it anything you want because this battle, is one with epic proportions and this will be another blockbuster chapter etched in the epic saga of Isipathana College versus Royal College rugby rivalry.

You can catch the Live action of the League Decider on Sunday, the 14th of August on Dialog Television Channel 140, ThePapare.com and Dialog Viu App from 3.45 pm onwards.