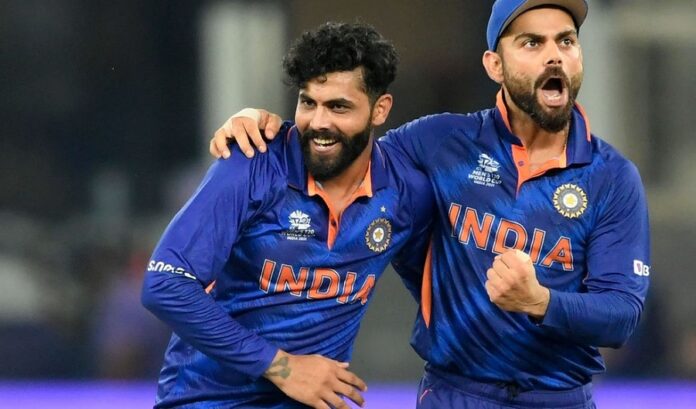 India demolished Scotland in Dubai, tying them in knots with the ball after winning the toss and opting to field first, bowling the Scots out for 85.

And in reply KL Rahul and Rohit Sharma starred as India raced to 89/2 in just 6.3 overs, securing the win and a huge net run rate gain boost.

Virat Kohli’s side went into the Group 2 fixture knowing that only a win would keep their qualification hopes alive.

And the quest for that victory got off to a terrific start as four Scotland wickets fell inside the first seven overs after Kohli had won the toss.

India’s spin trio then hammered home the advantage, with Ravindra Jadeja the pick with 3/15 off his four overs, as Scotland succumbed to 85 all out after 17.4 overs.

And the openers put on the quickest 50-run opening stand of the tournament so far, with the chase wrapped up in just 39 deliveries to lift India’s NRR to +1.619, the best in Group 2.

Rahul and Rohit put in a devastating display of power-hitting to race to the required target in Dubai.

The impressive Mark Watt took the ball for the start of the Powerplay and leaked just eight runs in a tidy first over. Yet that was as good as it got for Scotland, with every other over going for double-figures as the opening batters tore into the Scottish attack.

Brad Wheal did pick up the wicket of Sharma for 30 off 16 balls, but that barely slowed the scoring, with Rahul reaching his sparkling 50 off just 18 balls in the next over.

The 29-year-old was caught in the deep off Watt, going for a big hit to wrap up the win. And Suryakumar Yadav sealed it in style with a stunning six off his second ball.

Earlier, opener George Munsey had got Scotland off to a strong start with a gorgeous flicked six off Jasprit Bumrah and three consecutive fours off Ravichandran Ashwin.

But a bamboozling slower-ball from Bumrah got rid of captain Kyle Coetzer before Mohammad Shami had the dangerous Munsey caught by Hardik Pandya.

And the spinners took control of the game after the seamers’ breakthroughs, with Jadeja striking twice in the seventh over to leave Scotland 29/4 and with a mountain to climb.

Scotland’s lively middle-order hitter Michael Leask showed his class with a quickfire 21 off 12. But any hope of his side reaching a competitive total evaporated when Jadeja had Leask trapped LBW.

And the innings crumbled thereafter, with three wickets falling in three balls in the 17th over two Mohammed Shami dismissals sandwiched an Ishan Kishan run-out.

And Bumrah finished the job with a trademark delivery to clean up Mark Watt and finish with 2/10 off 3.4 superb overs.