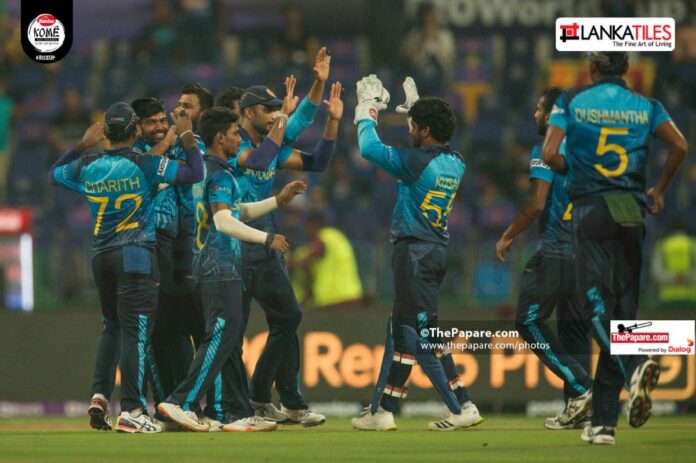 Pathum Nisssanka and Charith Asalanka scored 51 and 68 respectively as Sri Lanka posted 189 for 3, their highest score in T20Is in 2021 after being asked to bat first. In reply, the West Indies managed only 169 runs despite Shimron Hetmyer’s unbeaten 81* as Sri Lanka put on a disciplined, superior bowling effort on a good batting surface.

Nissanka and Asalanka added 91 runs off 61 balls for the 2nd wicket to lay a solid foundation after the Windies opted to bowl first.  Earlier, Kusal Perera, who had a quiet tournament at the top of the order, showed intent from the onset. He struck two fours and one massive six during his 21-ball 29 to get Sri Lanka off to a solid start. However, in the final over of the powerplay, Perera gave a return catch off the leading edge as Andre Russell ended the 42-run opening stand.

Nissanka and Asalanka played two beautiful late cuts off Akeal Hossain’s first over, which went down to the boundary to put off West Indies’ plans of bowling more spin towards the Lankan duo. While the Windies struggled to break the second-wicket stand, young Asalanka and Nissanka ran between the wickets well as the Windies looked poor in the field as well as in their bowling plans.

Nissanka brought a new repertoire of strokes to his game – paddling the seamers and reverse-sweeping the spinners to notch up his 3rd half-century in the match. He fell soon after for a well-compiled 51 off 41 balls.

After Nissanka’s dismissal, skipper Dasun Shanaka joined Asalanka to give the final impetus. The crafty young left-hander, Asalanka reached his second T20I fifty in just 33 balls. He upped the scoring rate after reaching the milestone smashing the Windies bowlers to all parts of the grounds.

Asalanka 41-ball knock of 68 had 8 fours and a six as Sri Lanka managed to score 57 runs in the last 5 overs. Asalanka fell in the penultimate over but skipper Shanaka stayed till the end to remain unbeaten on 25 off 14 deliveries.

Chasing a mammoth 190 runs to win, West Indies lost their opening batters early. Chris Gayle hit it straight to mid-off and Evin Lewis chopped one onto the stumps as left-arm seamer Binura Fernando, who came into the side for this match struck in his very first over to make it 10 for 2.

Nicholas Pooran, batting at number three, showed his intent early as he took on the Lankan seamers. However, Bhanuka Rajapaksa held onto a stunning catch at short mid-wicket off Chamika Karunaratne as Roston Chase was sent back for 9. The Windies were 52 for 3 at the end of the powerplay.

Pooran, who was dropped twice by Maheesh Theekshana on 5 and 10 respectively, looked dangerous. He made 46 off 34 balls before vice-captain, Dhananjaya De Silva, who didn’t play a single game in the competition took a diving catch off Chameera as a substitute fielder as Windies were 77 for 4 in the 11th over.

Karunaratne picked up 2nd wicket when he bounced out dangerous Andre Russell for 2 as West Indies had lost half of their side for 94 runs in 13.1 overs.

In the next over, Wanindu Hasaranga, the leading wicket-taker of the tournament and the no.1 ranked T20I bowler in ICC rankings, bamboozled the Windies skipper Kieron Pollard for a golden duck.

Jason Holder holed out to deep mid-wicket off Shanaka’s bowling while, Dwayne Bravo was castled by a Hasaranga googly. The Sri Lankan leg-spinner ended the tournament with 16 wickets in 8 matches, the highest by a Sri Lankan bowler in T20I world cups.

Hetmyer reached his fifty in 39 balls, and tried his very best to hit everything out of the park but it was little too late for the Windies, who crashed out of the tournament with their 3rd defeat.