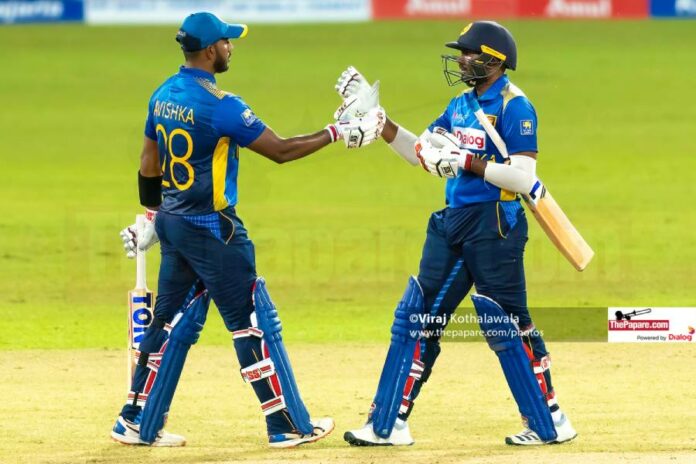 Avishka Fernando hit a fluent 76 and Bhanuka Rajapaksa scored 65 as Sri Lanka nervously chased down 227 with 8 overs to spare after Akila Dananjaya and Praveen Jayawickrama tore apart the Indian middle order with 3-wicket hauls to restrict the visitors to 225, after they were on top at 159 for 3 during one stage.

Earlier, having opted to bat, skipper Shikhar Dhawan was caught behind off Dushmantha Chameera, as the hosts drew first blood in the third over. Debutant Sanju Samson and Prithvi Shaw batted with ease to establish a perfect platform, adding 74 runs for the second wicket.

However, against the run of play, Skipper Dasun Shanaka who brought himself onto the attack, trapped Shaw plumb in front, one run shy of his half-century. Samson was the third Indian to fall, when he uppishly drove straight to extra-cover as left-arm spinner Jayawickrama picked up his maiden ODI wicket to have India 3 down for 118.

Soon after the break, Sri Lanka struck imminently through Jayawickrama, who got Manish Pandey caught behind for 11. The hosts inflicted further damage on the Indian middle order when Jayawickrama trapped Hardik Pandya plumb in front with a peach of a delivery.

Akila Dananjaya, in his second spell, turned the game around. He picked up three wickets in the span of seven balls. The wily customer first trapped the dangerous Suryakumar Yadav plumb in front for 40. Afterwards, his full-toss was completed missed by debutant Krishnappa Gowtham. A few balls later another debutant, Nitish Rana, was caught behind as India were 8 down for 195.

India lost 5 wickets for 48 runs in the first 10 overs after the rain interruption. The Indian tail wagged as Rahul Chahar and Navdeep Saini added a crucial 29 runs for the 9th wicket to take the visitors to 225.

The Sri Lankan openers added 35 runs for the first wicket before Minod Bhanuka departed for 7 as off-spinner Gowtham picked his maiden ODI wicket.

Even though Fernando batted with great authority, Rajapaksa rode his luck several times. He reached his maiden ODI fifty with back-to-back boundaries. The left-hander struck 12 fours during his 56-ball knock. Before Gowtham held onto a good running catch to give Chetan Sakariya his maiden international wicket, Rajapaksa was dropped by Nitish Rana in the previous ball at deep square leg.

Sakariya got his second in the next over he bowled by deceiving Dhananjaya De Silva with a back of the hand slower ball. Charith Asalanka joined Fernando to add 43 runs for the 4th wicket before Hardik Pandya dismissed the former with a yorker, that trapped him LBW. Skipper Shanaka lasted only a delivery as leg-spinner Rahul Chahar picked his maiden wicket to put Sri Lanka in a spot of bother at 195 for 5.

With only 13 runs needed for victory, Chahar got the set batsman, Fernando for 76 off 98 balls with 4 fours and 1 six to reduce Sri Lanka to 214 for 6. Chamika Karunaratne was stumped off Chahar with 7 runs to win. However, Ramesh Mendis and Akila Dananjaya held their nerve to take the hosts over the line.

With this win, Sri Lanka collected crucial 10 points in the ICC Men’s Cricket World Cup Super League 2020-2022. Earlier, India fielded five debutants in their playing XI in a plethora of changes, whilst Sri Lanka were forced to make three changes due to injuries.

The three-match T20I series will begin on 25th July at the same venue.