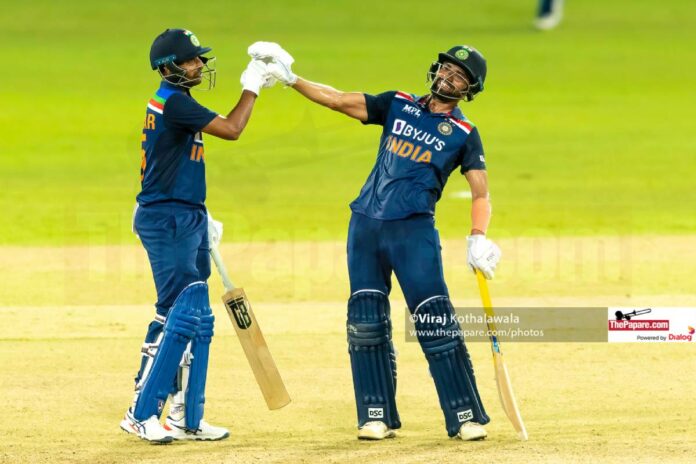 Chahar played a gem of an innings – 69* off 82 balls with 7 fours and 1 six – and was ably supported by Bhuvneshwar Kumar, who contributed with 19 runs to take India over the line in the final over after being 193/7 at one stage.

With this win, India took an unassailable 2-0 lead in the three-match series. The third and final ODI will be played on Friday.

With 83 runs needed from the last 3 wickets, Sri Lanka had the game in their hands but Chahar and Kumar used some poor bowling by the hosts to record India’s 10th consecutive series win over the islanders.

After opting to bat first again, Avishka Fernando struck a 71-ball 50 at the top of the order for the hosts, while Charith Asalanka played a gem of an innings in the middle overs – 65 off 68 balls with 6 fours. All-rounder Chamika Karunaratne once again added the finishing touches as Sri Lanka scored 80 runs in the final 10 overs. Leg-spinner Yuzvendra Chahal was the most impressive bowler for the visitors, picking up 3 crucial wickets for 50 runs.

Fernando and Minod Bhanuka managed to give a solid start for the hosts, adding 77 runs for the first wicket. Left-handed Minod played with more confidence and intent than in the previous game as the pair collected 10 boundaries – 9 fours and 1 six in the first powerplay – as the home team managed 59 runs in the first 10 overs.

However, against the run of play, Minod Bhanuka chipped one straight to mid-wicket as Chahal picked up his first wicket. Bhanuka Rajapaksa fell in the very next ball for a golden duck, edging behind to Ishan Kishan as Sri Lanka went from 77 for no loss to 77 for 2 in the space of two balls.

Fernando was then joined by Vice-Captain Dhananjaya De Silva, as the pair started rebuilding the innings with a steady 47-run stand. Fernando reached his 4th half-century in 70 balls, but in the very next ball he faced, attempted a stupendous shot off Bhuvneshwar Kumar, only to find that the safe hands of Krunal Pandya at mid-on another Sri Lankan batsman threw away another start.

Sri Lanka continued to lose their way as De Silva too perished attempting a nothing of a shot against Deepak Chahar’s slower delivery, as he too skied one to put the hosts in trouble at 134 for 4. He made just one boundary during his 45-ball 32.

Skipper Dasun Shanaka along with Charith Asalanka added 38 runs for the 5th wicket, before Chahal produced yet another wicket, castling the former for 16. Wanindu Hasaranga was deceived by Chahar’s ‘knuckle’ ball, as Sri Lanka were six down before the 40th over mark. Since 2019, Sri Lanka has possessed the worst record for batting (the most number of wickets amongst full members) from the 11th to 40th overs.

Asalanka, playing only his 4th ODI, batted with maturity – he rotated the strike well and held the innings together despite wickets falling around him, to rack up his maiden half-century.

Karunaratne joined Asalanka at number eight as the two youngsters added 50 valuable runs for the 7th wicket, before left-handed Asalanka was dismissed off Kumar while looking for the big boundaries.

Karunaratne once again provided the late impetus to the Lankan innings with an unbeaten 44 off 33 deliveries with 5 boundaries, with two of them coming in the final two balls of the innings.

Prithvi Shaw looked ominous against Kasun Rajitha, who came in place of Isuru Udana for this game. He drove Rajitha elegantly for three fours in the first over of the chase. However, Skipper Dasun Shanaka made a quick change and brought in Wanindu Hasaranga to the attack, who bamboozled Shaw with a top-spinner as the previous game’s hero was castled in the third over.

Rajitha made many errors as a fielder, but managed to inflict a chop-on by Ishan Kishan as the hosts struck two early blows inside the first five overs.

Hasaranga came back to get an important breakthrough of Shikhar Dhawan, who was adjudged LBW courtesy a DRS after the on-field umpire initially adjudged him not out. With Dhawan’s dismissal on 65, Sri Lanka had a spring in their step to test the Indian middle order.

Manish Pandey and Suryakumar Yadav constructed a valuable 50-run stand for the 4th wicket. However, against the run-of-play, Pandey was run-out in the non-striker’s end as Shanaka managed to palm the straight drive, and the batter faced the consequences for backing a little too much. Four balls later, India were five down for 116 as Hardik Pandya ballooned a Shanaka delivery straight to short mid-wicket.

Yadav was batting beautifully with some elegant strokes using his wrists – he reached his maiden fifty in ODIs in 43 balls. Just as Krunal Pandya and Yadav looked like they were building a healthy stand, Sandakan trapped Yadav plumb in front to reduce the visitors to 160 for 6. Even though Sandakan took the prized wicket of Yadav, he was quite expensive and bowled plenty of loose deliveries. Sandakan was questionably given his full quota of overs by Skipper Dasun Shanaka.

Hasaranga, who was brought into the attack for his second spell, castled Krunal Pandya with a peach of a delivery after he fought his way to 35. With Pandya’s dismissal in the 36th over, India were 7 down for 193. However, Deepak Chahar and Bhuvneshwar Kumar played sensibly to take India over the line.