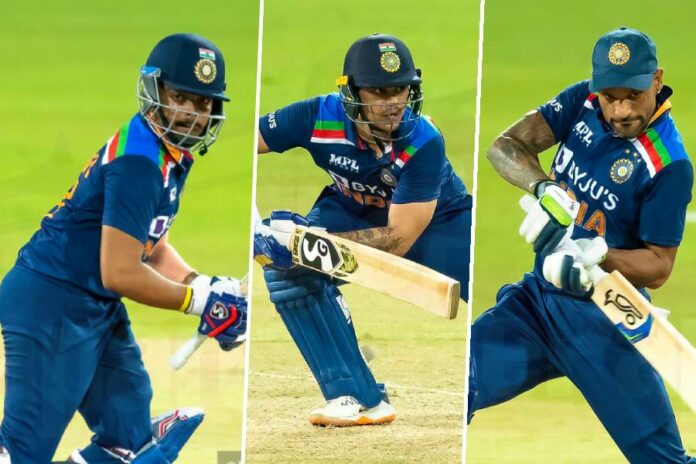 India powered through to a comfortable 7-wicket win over Sri Lanka in the 1st ODI played at the R. Premadasa International Cricket Stadium, Colombo on Sunday (18).

Chamika Karunaratne’s late flourish of 43 in 35 balls took Sri Lanka to 262 for 9, their highest score in ODIs without a single half-century. However, the Indian batting lineup was too good for the hosts as Shikhar Dhawan anchored the chase with a fine, unbeaten 86*. He was well-supported by some fearless contributions from the youngsters as they reached the target with more than 13 overs to spare.

India got off to a rollicking start thanks to some amazing stroke play on the front foot by Prithvi Shaw against the Sri Lankan seamers. He scored 9 elegant fours during his 23-ball 43. Soon after he was hit on the helmet by Dushmatha Chameera, Shaw faulted against Dhananjaya De Silva’s off-spin, miscuing to long-on to end the 58-run opening stand.

Ishan Kishan, playing his ODI debut whilst celebrating his 23rd birthday, started off with a six, followed by a four off his 1st 2 deliveries. Kishan powered his way to a half-century in 33 balls. His use of his feet against the spinners was impressive. However, the left-handed wicket-keeper batsman nicked behind off Lakshan Sandakan to end the 2nd wicket partnership of 85 runs.

After playing the second fiddle in the first two partnerships, Dhawan got into his usual groove and took the center stage during the 3rd wicket stand with Manish Pandey. They added 72 runs to take the game further away from Sri Lanka. After Pandey’s dismissal, Suryakumar Yadav, also on debut, joined Dhawan to take India over the line with ease. Yadav made 31 off 20 balls with 5 fours.

Earlier, Dasun Shanaka on his ODI captaincy debut, won the toss and elected to bat. The newest opening pair for Sri Lanka, Avishka Fernando and Minod Bhanuka added 49 for the first wicket with a steady stand. However, Fernando found Manish Pandey at extra-cover off Chahal in the first delivery off the spinners in the game.

Bhanuka Rajapaksa, the debutant for Sri Lanka, commenced his ODI career with a slog-sweep over the mid-wicket boundary off Chahal. He continued to counter-attack the Indian spinners during his 22-ball 24 which had two sixes and two boundaries, to showcase great promise and intent at number three. Having survived a close DRS review on 22, Rajapaksa perished while attempting to hit Kuldeep Yadav’s short-delivery against the spin. He managed only to top-edge to Dhawan, who took a good diving catch.

Minod Bhanuka – the wicket-keeper batsman, playing only his second ODI, fell three balls later, edging to first slip as Yadav further dented the Lankan innings. He was cautious from the start of the innings, striking only at 61.

Dhananjaya De Silva didn’t last long as he holed out at deep mid-off to become Krunal Pandya’s only wicket.  Charith Asalanka struggled to rotate the strike regularly, playing out 38 dot deliveries during his 65-ball knock of 38. Asalanka and Wanindu Hasaranga were dismissed by Deepak Chahar as Sri Lanka continued to lose wickets at regular intervals which prevented them from gaining any momentum in the innings.

The Indian spin trio – Kuldeep Yadav, Yuzvendra Chahal and Krunal Pandya combined to take 5 wickets for 126 runs from their 29 overs to dominate proceedings in the series opener until the late blitz. The Indians executed their bowling plan well throughout the innings as the inexperience of the Lankans was exposed on an usual Khettarama pitch which had some spin.

Skipper Shanaka, made a fighting 50-ball 39 before holing out to deep long on. Sri Lanka looked like they will end up well below 250 but number eight batsman Karunaratne and Dushmantha Chameera added 40 runs in 19 deliveries for the 9th wicket to a put reasonable score on the board. They scored 32 valuable runs in the last 2 overs, including some gigantic sixes. Karunaratne remained unbeaten on 43*, with 2 sixes and a four.

The second match in the three-match series will be played on 20th July at the same venue.