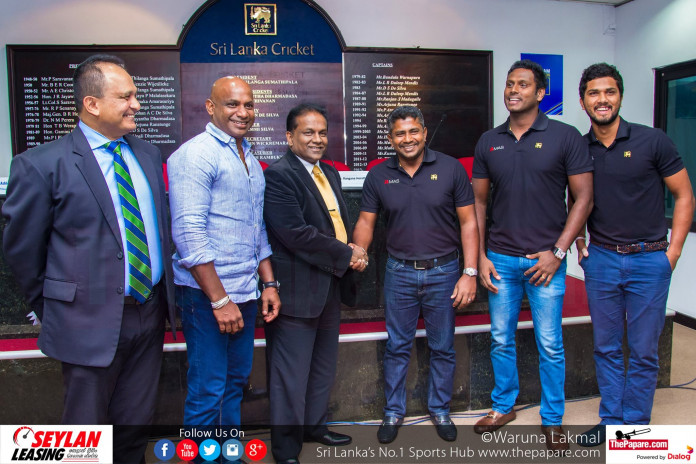 The national cricket team minus their regular captain and vice-captain (who will sit out the tour due to injuries) left to Zimbabwe in the early hours on Tuesday to play two Test matches.

Sri Lanka has three days of practice before they go into the first of two Tests against Zimbabwe at Harare on October 29. The second Test, also at Harare, starts on November 6.

Photos of the SLC Press Conference Regarding Annual Contracts 2016

Newly appointed captain, Rangana Herath who is set to make his captaincy debut at the age of 38 is confident that his team could continue the good form from the Australian series, “I never thought I’ll captain Sri Lanka at the age of 38, but I am honoured to lead the country. We have an inexperienced, young side. But, if you look at our recent performances in the Test series against Australia, the confidence we gained from the 3-0 win will be very valuable to us. The team’s confidence levels are very high after that victory. I’m confident that my team will perform in Zimbabwe.” Herath said to the media yesterday.

The regular skipper Angelo Mathews also expressed his views on his successor for this particular series, “I must congratulate Rangana Herath, and if anyone deserves to captain the side it is definitely Rangana. He is a great team man and the whole team is behind him.” Mathews stated at a press conference held on Monday.

“In 2016, I got hit with quite a few injuries and it’s very frustrating to watch the team play and not be able to take part. I had about a one and half month break to recover and I was preparing myself to be ready for the Zimbabwe tour but unfortunately there has been a setback. We did an MRI scan which showed multiple injuries on the same calf muscle so I had to pull out and the expert doctors’ panel advised me and SLC, not to send me on tour because it would jeopardize my South Africa series prospects as well.” Mathews, who has had the biggest workload as an international cricketer since 2012, said about his injury.

Vice-captain Dinesh Chandimal also made his comments on Herath’s appointment, “I am very happy for Rangana aiya, and he deserves it the most. My injury is getting better and I am hoping to play soon in Zimbabwe. I am hoping to be fit for the ODI tri-series.”

The four-man Test bowling attack is very inexperienced with only one player who has played Test cricket, Suranga Lakmal.

Sri Lanka Cricket President, Thilanga Sumathipala had ample reasons as to why so many Sri Lankan Cricketers have broken down in the recent past. He specifically criticized the poor player management over the last three years.

“We are experiencing good cricketers, who have come in line from under 19, 22, 23, who have played club cricket, played for the country, they go to the top level but they can’t sustain because they are badly managed. If there is a fast bowler who has bowled 100 overs, there should be a study stating that after 18-20 overs, you have to stand him down and pull him out of the game, let him recover physically which we don’t do. We never had proper player management,”

Those days we played about 7 Test matches and about 18-20 ODIs a year, but now we play around 12 Tests, over 30 ODIs and 10 T20Is plus other matches. The demand on the players has expanded and we have not scientifically looked into them, which we are doing now. It will take another 8-10 months to get the right results. Once we have our brain center which we are building in Colombo, we’ll have this sorted out.” Sumathipala further stated.