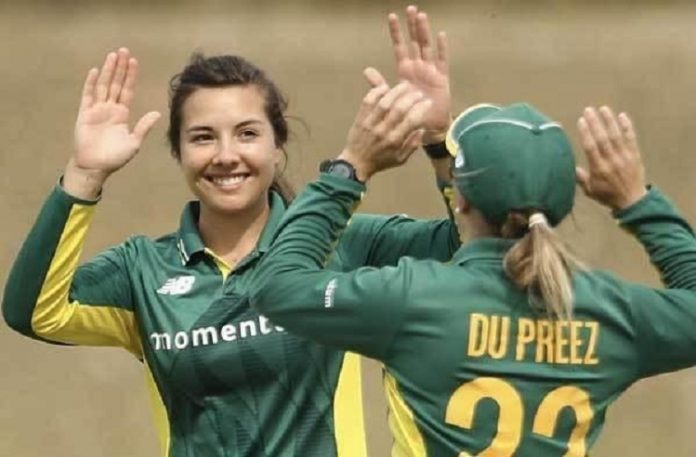 The Sri Lanka Women’s Cricket Team got off to a shaky start as they went down to the South Africa Women’s Cricket team by 41 runs in the 2nd T20 warm up match of the ICC Women T20 World Cup. It was held between the two sides at Karen Rolton Oval Grounds in Adelaide.

After winning the toss, the Sri Lanka Women skipper Chamari Athapatthu chose to field first. The lady lions got off to a great start as the left-arm seamer Udeshika Prabodhani managed to dismiss both South African openers within the first 3 overs. However, South African number three batswoman Marizanne Kapp and number four batswoman Mignon du Preez rescued the innings by building a 50-run partnership for the third wicket.

In addition to this, Laura Wolvaardt and Chloe Tryon built an unbeaten 44-run partnership for the 6th wicket as the South Africa women posted 146 runs for 5 wickets in the allotted 20 overs. Marizanne Kapp was the top scorer as she stroked 44 runs off 44 balls with 3 fours and a six. In addition to this, Laura Wolvaardt scored an unbeaten 38 runs off 24 balls, including 5 fours and a six.

34-year old left-arm seamer Udeshika Prabodhani was the pick of the bowlers for Sri Lanka Women as she took 2 wickets for 8 runs in her allotted 4 overs. The skipper Chamari Atthapatthu also did well with the ball, taking 2 scalps for 28 runs with her useful off-spin.

With new, young and exciting players in our squad, I’m desperate to see how our….

Chasing 147 runs to win, Sri Lanka got off to a poor start as they lost their ace batswoman Chamari Atthapatthu for just 1 run in the 2nd over of the innings. The opener Hasini Perera and number three batswoman Harshitha Madavi built a 33-run partnership for the second wicket, but it came at a slow pace as they consumed 46 balls.

After their dismissals, the Sri Lanka women lost their way as they continued to lose wickets at regular intervals and eventually made only 105 runs for 8 wickets in the allotted 20 overs. Ama Kanchana, who came at number 8, gave some impetus to the innings by scoring a quick 24 runs off 15 balls with 2 fours and a six, but it was not enough as the South Africa Women registered a 41-run victory.

The leg-spinner Sune Luus was the star performer with the ball for the South Africans as she picked up 4 wickets for 20 runs. The Sri Lanka Women will play their second warm up game against England Women on the 18th of February at the same venue. Keep logged on to ThePapare.com for all the live updates, match reports and information on ICC Women’s T20 World Cup.