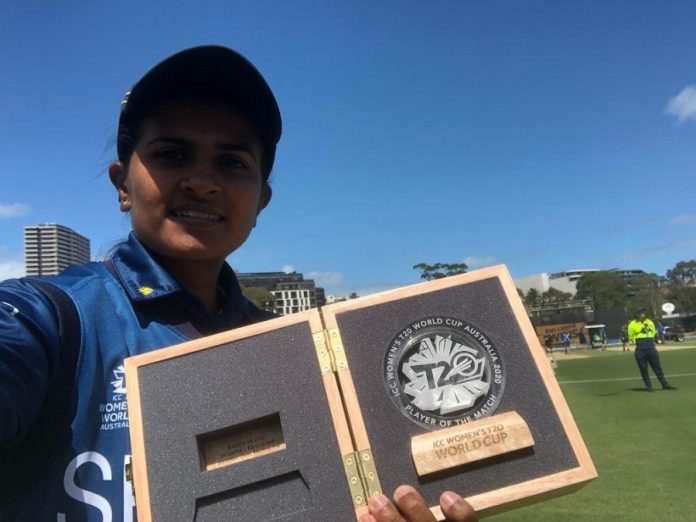 Siriwardena’s World Cup best and Achini Kulasuriya’s two for 19 saw Bangladesh slip up in their final match of the tournament.

Hasini Perera’s 39 not out helped to seal Sri Lanka’s first victory by nine wickets with 27 balls to spare.

Siriwardena’s figures were the best in the tournament to date in her final international match, with her four for 16 a memorable farewell after 17 years of service to Sri Lankan cricket.

She started her swansong just as she would have hoped, removing Murshida Khatun for three when Hasini Perera caught the opener off a top edge.

Her replacement Sanjida Islam (13) didn’t last long as Kulasuriya took a wicket on the first ball of her spell before trapping Ayasha Rahman (6) lbw to finish her first over with figures of two for two.

Held at 26 for three at the end of the Powerplay, Bangladesh struggled to find any rhythm with the bat as Nigar Sultana Joty (39) and Fargana Hoque Pinky (13) could only take the score on the board to 39 by the midway point.

Sri Lanka continued to bowl economical overs, with Kavisha Dilhari conceding two from her first over before taking her first wicket as she removed Fargana lbw for 13.

Siriwardena took her second scalp of the afternoon when Udeskika Prabodani caught Rumana Ahmed at short fine leg for a duck and added a third when Ritu Moni was caught in the ring by Sugandika Kumari for eight.

Fahima Khatun was dismissed in the same fashion in the penultimate over for one, while Nigar Sultana was run out by Chamari Athapaththu having scored five boundaries in Bangladesh’s 91 for eight.

A wicket maiden from captain Salma Khatun in the first over started Bangladesh off well but they were left rueing a crucial wicket when Fargana dropped Athapaththu at mid-off in the second over.

And the skipper’s 51-run opening partnership with Hasini Perera set Sri Lanka well on their way in the 92-run chase, both batters finding two boundaries – and Athapaththu a six – in the Powerplay.

The captain looked to be finding her groove when she blasted another six over Rumana at the boundary in the eighth but was removed on the next ball when stumped off Nahida Akter.

That scalp proved the perfect 20th-birthday present for Nahida, who became the youngest female bowler to 50 T20I wickets.

After their flying start, Sri Lanka were slowed by Bangladesh’s bowlers but Perera’s 39 not out sealed the nine-wicket victory as they bowed out on a high.

Today’s result though does not have a bearing on qualification for the next edition of the tournament.

Hosts South Africa and the seven other top teams in the MRF Tyres Women’s T20I Team Rankings on 30 November 2021 will qualify automatically for the ICC Women’s T20 World Cup 2022.