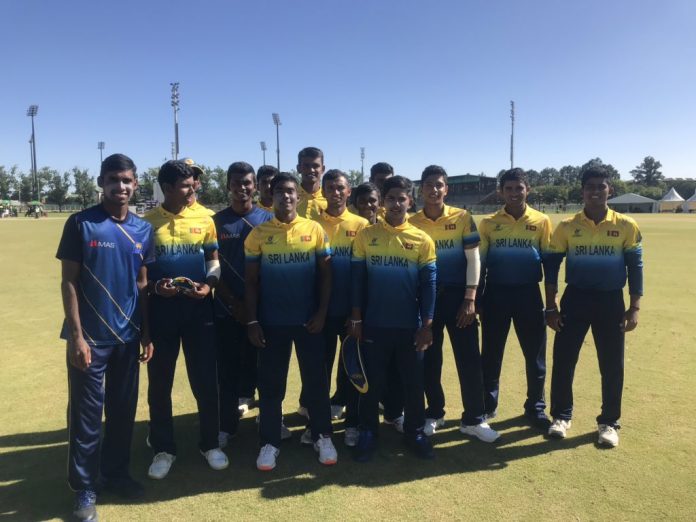 A convincing victory by 233 runs against the Minnows, Nigeria at Potchefstroom, sealed a semi-finals spot in the plate segment for the young Lions in the U19 World Cup in South Africa.

After posting 306, Lankan pacer Dilshan Madushanka ran through the inexperienced Nigerian line up in a canter. Madushanka managed to get the first three wickets in quick succession and then cleaned up the tail to complete his five-for.

Chamindu Wijesinghe had to step in after Matheesha Pathirana walked off the field due to an injury. He did his job by taking 2 for 12 in his five overs, while Kavindu Nadeeshan bagged the remaining three wickets.

Navod Paranavithane was unfortunately run out for just 4 runs in the 4th over quite early on, after being put to bat first. However, Mohommad Shamaz and Ravindu Rasantha made full toll of the given opportunity. Shamaz stroked a classy 56 before he was caught LBW when the score was 105.

Then entered the skipper Nipun Dhanajaya. He got off to a flying start, scoring 37 off 36 deliveries including 7 boundaries. After the dismissal of Dhanajaya, Ahan Wickramasinghe tried to keep up with the tempo but failed to make a big impact.

Rasantha, however, was untroubled. He kept on accumulating runs and reached his century to become the first centurion for the young Lions in the World Cup. His unbeaten knock of 102 off 111 deliveries included 7 fours and 2 sixes.

The impactful innings in the last few overs came from Sonal Dinusha, who slammed a quick fire 43 off 36 deliveries, which propelled the Lions to a formidable 306 for 7 in their allocated overs.