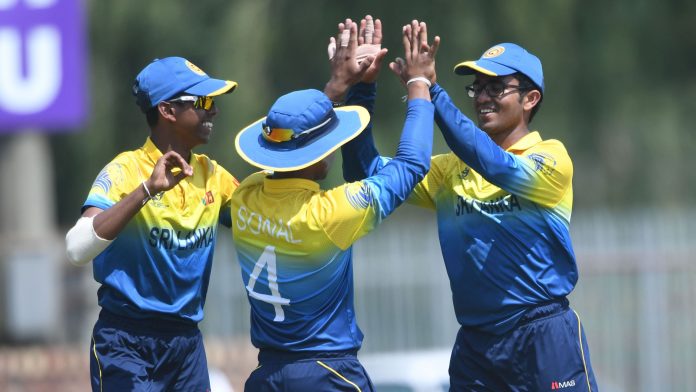 Sri Lanka U19s were on the superior side today at Potchefstroom as they stormed past Scotland U19s in the plate semifinal as they defeated Scotland by 97 runs, qualifying to the plate final for the 2nd consecutive time.

Sri Lanka U19s skipper Nipun Dhananjaya won the toss and had no hesitation batting first at the North-West University Ground and the openers responded well with a 90 run-partnership. Wicket-keeper batsman Kamil Mishara was dismissed for 39 but his partner Navod Paranavithana went on to score a fine fifty including 4 boundaries and 1 six.

Last game centurion Ravindu Rashantha couldn’t fire this time as he fell off Jamie Cairne’s bowling for 21. The telling partnership of the innings was constructed by Ahan Wickramasinghe and Captain Dhananjaya for the 4th wicket, 103 runs off 93 balls, laying the foundation for a big score.

Wickramasinghe raced to a quickfire 59 while Dhananjaya mustered a run-a-ball 69 taking Sri Lanka to 277/6 after 50 overs.

New Zealand U19s held on to a thrilling win in the group A encounter vs Sri Lanka in ICC Under 19 Cricket…..

Three half-centuries from opener Navod, Captain Nipun and in-form Ahan steered the Young Lions to a competitive score of 277/6 against Scotland today in the Plate Semifinal of the #U19CWC. ?

The boys have started well with ball too ?

In reply, the Scottish innings never got going, as they lost Wickets in regular intervals courtesy of Chamindu Wijesinge, Dilshan Madushanka and Kavindu Nadeeshan who shared 7 wickets among them.

Rain disturbed the 2nd innings at the 40-over mark and the game didn’t resume after that point. Scotland was 149/8, 97 runs behind the required target according to the D/L method.

With this win, Sri Lanka U19s are through to the plate finals of ICC U19 Cricket World Cup on 3rd March and will play against the winner of the 2nd plate semifinal between England and Zimbabwe.