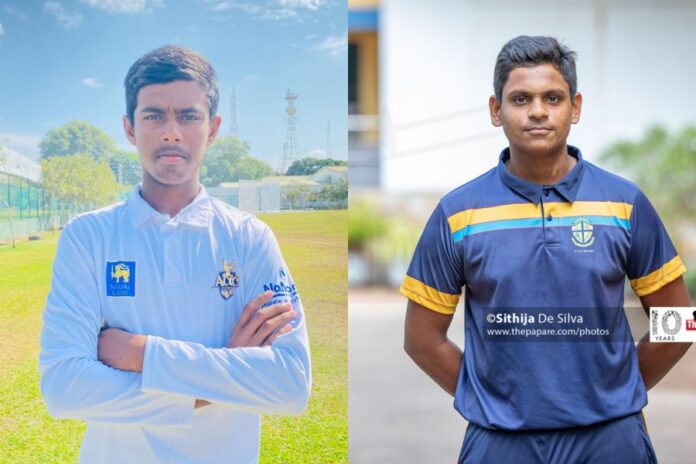 Two games in the ongoing first XI Schools Cricket season were worked off on Tuesday (06).

St. Joseph Vaz College met Lumbini College in a traditional encounter which ended in a draw, despite a dominating performance from the Lumbini boys.

The game was played at the BOI grounds in Katunayake, and Lumbini College got ahead in the tussle very early as they restricted the host team for 185 runs on Day 1. Vishwa Rajapaksha made a valiant hundred, when the rest of his team fell apart terribly.

The batting was led by V. S. Kaushalya, who made an impactful hundred which gave Lumbini a realistic chance of making a game out of this match. Kaushalya’s 103 runs came off 151 deliveries with 12 fours in it. He was well supported by the Skipper Jasinghe, who made a fine fifty for himself.

The pair helped Lumbini post a comfortable total of 254 runs for their first innings.

Rajapaksha was vibrant once again as his lone fight kept going on. He picked 6 wickets at an expense rate of just 3.1 runs an over. Janith Fernando was the only other wicket-taker with 1 scalp to his name.

Coming out for their second lease at the crease, the Wennappuwa school scored 153 runs for the loss of 5 wickets to evade the humiliation of a defeat.

Wickets fell at an astounding rate in today’s play, as we have already seen 21 wickets in this game on day one.

Manuga Yonal picked up 7 wickets for the Thomians in the first innings of the match as the Galle school fell for 117 runs all out.

However, the fightback was even better as the host tumbled down further below, being bowled out for 97 runs. The visitors were at 7 for 1 at close of play on day one.