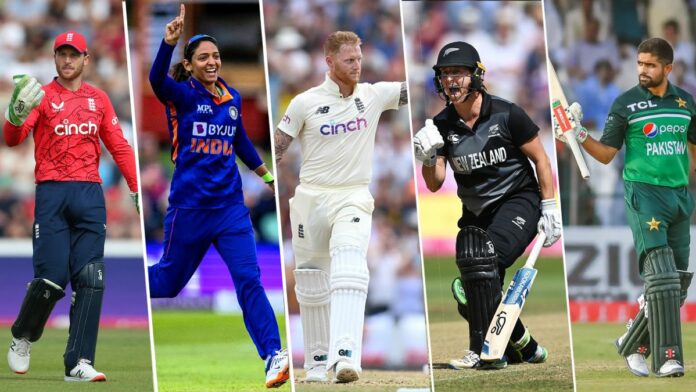 The International Cricket Council (ICC) today completed announcements of the ICC Teams of the Year, a feature of the ICC Awards 2022 which captures the best combined XIs across the different formats of men’s and women’s international cricket after an action-packed year of competition.

Teams were identified from selections submitted by the specialist panel of media representatives that make up the ICC Voting Academy. The esteemed panel made their selections based on player performances throughout the calendar year, nominating their one to 11 and choosing a captain and a wicketkeeper for each.

The ICC Men’s Test Team of the Year is littered with outstanding performers in the longest format. With a combined 6,988 runs during the calendar year and 198 wickets, there are outstanding individuals throughout the lineup.

Australia enjoyed another year of Test success, consolidating their position atop the ICC World Test Championship standings. Four of their stars feature in this Test XI, including top ranked batter and bowler in the MRF Tyres ICC Men’s Test Rankings, Marnus Labuschagne and Pat Cummins.

Ben Stokes took the England captaincy in April and was a key catalyst for their Test revival. He is named captain of this side which features two of his teammates, James Anderson and ICC Men’s Player of the Month winner for June, Jonny Bairstow.

This side also boasts Pakistan’s Babar Azam, who scored more Test runs than any other batter in 2022, and the world’s leading Test wicket-takers during the year, Nathan Lyon and South Africa’s Kagiso Rabada.

The ICC Women’s Cricket World Cup 2022 in New Zealand was filled with spectacular individual performances and breathtaking last-over drama, and the icons of the tournament feature heavily in the Women’s ODI Team of the Year, led by India’s influential skipper Harmanpreet Kaur.

Australia clinched the silverware back in March, and two figures who contributed significantly to their triumph are named in the Team – Beth Mooney and the ICC Player of the Tournament, Alyssa Healy – both of whom rank in the top two of the MRF Tyres ICC Women’s ODI Player Rankings for batters.

South Africa’s Laura Wolvaardt enjoyed another remarkable run in 2022, scoring more runs than any other batter in ODIs, and her compatriot Shabnim Ismail joins her in this illustrious XI as the leading wicket-taker during the year in the format.

The Women’s ODI Team of the Year also boasts several other prolific wicket-takers, including India’s Renuka Singh, who flourished in her first full year of ODI cricket, and the top-ranked bowler in the format, England’s Sophie Ecclestone, who claimed the most wickets in New Zealand during the Women’s CWC.

Heading into ICC Men’s Cricket World Cup year, the Men’s ODI Team of the Year spans the last 12 months of competitive bilateral cricket, and no fewer than seven nations are represented in the lineup for 2022.

Pakistan’s Babar Azam is named in the XI as captain for the second consecutive year, after scoring 679 runs at a phenomenal average of 84.87 to consolidate his position at the summit of the MRF Tyres ICC Men’s ODI Player Rankings for batters.

Babar leads the side which includes top run scorer in ODIs, India’s Shreyas Iyer, who registered 724 runs in his 17 matches. Shai Hope also features after another impressive year for West Indies, sharing three centuries apiece with the skipper.

Another player who celebrated three centuries was Zimbabwe’s Sikandar Raza. The ICC Men’s Player of the Month for August peaked in 2022, attaining his highest ranking position among all-rounder’s during the year.

More winners in the ICC Awards 2022 will be revealed on ICC digital channels in the next 48 hours, where the focus will shift towards the outstanding individual performers from the global game in 2022.

Wednesday 25 January will see the first set of individual award winners revealed in the Associate, T20I and Emerging categories.

A full list of nominees in selected categories can be found here.