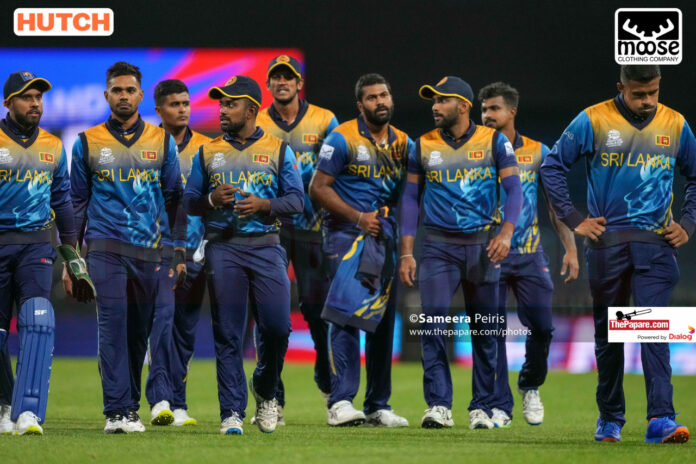 Despite winning the Asia Cup 2 months ago, coming into this T20 World Cup, the general expectation from Sri Lanka would have been a Super 12 exit. Yet, despite meeting that result, you would say, it’s been a disappointing run by the Sri Lankans in Australia.

Sri Lanka’s campaign took a hit even before a single ball was bowled in the World Cup, when they lost left-arm quick Dilshan Madushanka to injury on the eve of their tournament opener. The 22-year-old tore into the international scene during that Asia Cup campaign and as a left-armer who could bowl with pace, he’s a rare commodity in the Sri Lankan camp, making him pretty-much irreplaceable.

Unlike the previous World Cup, this time Sri Lanka came into the qualifying round almost certain of winning 3 out of 3 and going through to the Super 12 Round as A1. Those predictions took a massive hit when they were completely outplayed by Namibia in their first game of the tournament, losing by 55 runs. In a way, the game was a sign of things to come for Sri Lanka as the pattern of starting well and then completely losing intensity and focus turned out to be a theme during the campaign.

In all, Sri Lanka lost 4 players to injury during the tournament, including 3 quicks – Madushanka, his replacement in the squad Binura Fernando and leader of the attack Dushmantha Chameera. Danushka Gunathilake was also ruled out during the 1st round, while Pathum Nissanka and Pramod Madushan missed games due to injury.

Bowlers battle hard but Sri Lanka bow out with loss

Chameera and Madushanka were the biggest blows, for a multitude of reasons, most critically because it forced Sri Lanka to change up their bowling plans drastically to accommodate the likes of Lahiru Kumara, Binura Fernando and Kasun Rajitha, who hadn’t played T20Is in a while. Wanindu Hasaranga and Maheesh Theekshana’s overs became even more important to manage and the pair ended up having to bowl more than what they usually would in the death, meaning Sri Lanka had fewer wicket-taking options in the middle overs.

A less noticed fact was that as both Chameera and Madushanka are quite good in the field and their replacements were comparatively less competent, the Sri Lankan fielding plans too took a hit as a result of losing both of them.

Talking about fielding, it was to a great degree one of the key reasons for Sri Lanka’s Asia Cup victory. However, it seems to have almost regressed as the tournament wore on. Pathum Nissanka’s drop of Glenn Phillips, who went on to make a century, was the costliest miss for Sri Lanka but was not an uncharacteristic mishap in a campaign that saw at least 8 catches going down. Most disappointingly, it seemed like many of the opportunities were missed by players who are some of the better fielders in the side, including Dasun Shanaka, Pathum Nissanka and Ashen Bandara.

The ground fielding was better in patches but once again, not anywhere near as good as how Sri Lanka had fielded during the Asia Cup.

Sri Lanka’s No. 4 – No. 8 collectively contributed 360 runs in 8 games at an average of 12.85 a game and a strike rate of 104.95. Is there any more that can be said? Bhanuka Rajapaksa and Charith Asalanka both crossed 100 runs in the tournament, but overall, it was a very poor performance from the middle-lower middle order, with Shanaka, Hasaranga and Karunaratne contributing a measly 135 runs overall – easy to see why Sri Lanka struggled against the top teams in the group. It was particularly disappointing because coming into the tournament, the lower middle order seemed to be one area where Sri Lanka looked secure in comparison to previous years.

Well, yes. Kusal Mendis seems to have taken to his role as wicket-keeper/opener quite well and is slowly becoming an integral part of the side. He wasn’t as consistent as he would have liked, especially against the higher ranked sides, but when he did make runs, they were very impactful.

Dhananjaya de Silva, after sitting on the bench for the entirety of the previous T20 World Cup just 12 months ago, was by far Sri Lanka’s best all-rounder in the competition. His batting was always the worry in T20Is, but during the tournament, he managed to play some important knocks at a good strike-rate. With this edition of the World Cup seemingly favouring the bowlers, he was a major asset to the side against both spin and pace. His off-spin was as good as ever, despite perhaps being under bowled, finishing with 6 wickets at a strike rate of 12.1.

Perhaps the most encouraging sign of all was seeing Lahiru Kumara consistently trouble the batters. The quick has been out of international cricket due to injury since March 2022, but not only did he manage to stay fit throughout the competition but seemed to get better as the tournament went on. He wasn’t at his quickest but still managed to hurry batters, his spell against Australia in Perth was perhaps one of the most memorable moments for Sri Lanka in the competition.

4 wins in 8 games doesn’t seem like a bad performance, but Sri Lanka would have come in to the competition expecting a minimum of 5 wins. Overall, once again they did not manage to upend any of the ‘big’ teams in Australia, England and New Zealand. They had their moments against each of the three but did not have it in them to finish things off, the batting in particular looking out of its depth at times. A 5:3 win-loss ratio may have been acceptable, but the loss against Namibia certainly makes this a disappointing campaign overall.