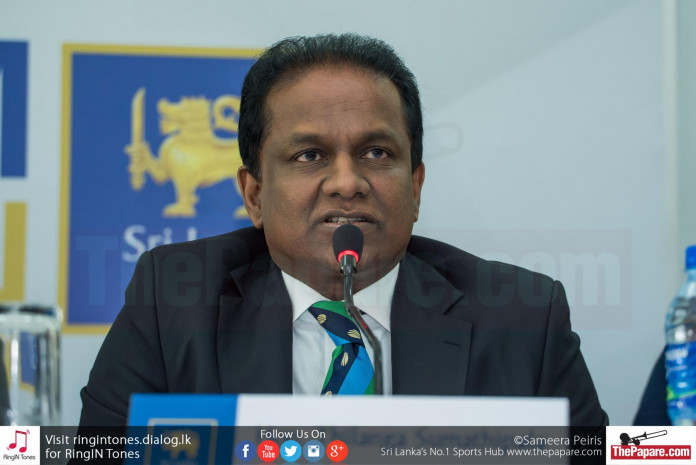 Sri Lanka Cricket President Thilanga Sumathipala stated that he has no intentions to resign from his post following continuous, embarrassing defeats for the national team.

Sumathipala responded to the media 24 hours after former world-cup winning captain and current Minister of Petroleum, Arjuna Ranatunga blamed the present administration for the poor performances of the national team and called for the resignation of Sumathipala, “Sri Lanka Cricket is going through the worst period, you can’t blame only the players, they are demoralized. It is the fault of the management. The Chairman of Sri Lanka Cricket should resign from his post”, Ranatunga said on Tuesday, following the recent 3-0 defeat to India.

Sumathipala did not answer directly to Ranatunga’s statement but answered to another question posed by a journalist whether he has any intention to take up a position at ICC.

“I can stay in my post until next year (Before the next election) and for at least another 3 years, I have no intention in going for a post at ICC. During the ICC discussions, they seek my counsel and expertize more often due to my experience and seniority so there were suggestions for me to go for a higher post at ICC. I will not leave my responsibilities or resign from Sri Lanka Cricket until 2019 World Cup.” Sumathipala said at a press conference on Wednesday in Colombo.

Sumathipala, Sri Lanka’s deputy speaker of parliament, was elected as President in the Sri Lanka Cricket elections held in 2016 defeating Arjuna and his brother Nishantha Ranatunga.