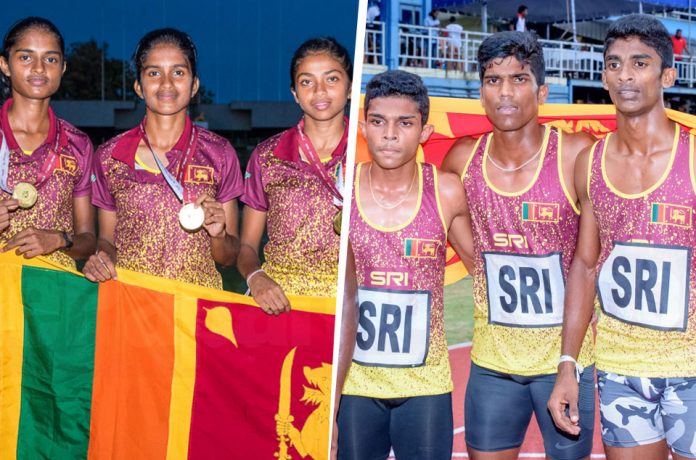 Both Sri Lankan Men’s & Women’s U20 4X400m will take the field tomorrow (14th) at the IAAF World Youth Championship which is held in Tampere, Finland.

All the Sri Lankan individual athletes have now bowed out from the World Junior competition. The opening day featured the 16-old steeplechaser Parami Wasanthi and Dilishi entering the competition. Parami despite running a new junior national record time in the heats could not get through to the next round while Dilishi was placed last in her heat suffering what looked like a niggle in her leg.

Entering the field on day two of the competition speedster Amasa De Silva managed to scrape through to the semifinal as one of the fastest losers in the women’s 100m while Aruna Darshana made easy work of his heat as he managed to win the race comfortably.

Read :  Aruna and Amasha through to the semi-finals

Aruna and Amasha both bowed out of the competition in the semifinal stage on the third day in Tampere. Amasha was placed last in the women’s 100m semifinal heat and failed to make it to the final of the event. Asian U20 champion in Men’s 400m was the Island’s biggest hope for a podium finish in the championship made a shock exit as he only managed to finish the semifinal placed 5th there by not making the cut to take part in the final.

Read: Did the cold climes cost Aruna a place in the final?

Sri Lankan will be now banking their hopes on the Men’s & the Women’s 4X400m relay teams as they will look to win Country’s first ever medal in the competition.

Sri Lankan Women’s U20 Relay team will compete in the second of the three semifinals at 2.20pm Sri Lankan time. They will need to finish in the first two spots of the semi to make sure that they earn automatic qualification for the finals. The Sri Lankan quartet which has a seasonal best time of 3:43.31 achieved at the South Asian Junior Championship in May this year will have to up their game with Japan. Australia and neighboring India all having clocked better times this season.  The quartet will consist of Amasha De Silva, Dilishi Kumarasinghe, Sachini Divyanjali, Romeshi Attidiya while Sandumini Bandara will be the stand buy on tour for the team.

Sri Lanka Men’s U20 4X400m team who are the current Asian Champions in the event will have the entire country hoping for a repeat of their heroics in Japan.

This however is not going to be an easy task for the Sri Lankan quartet as they will have to overcome the challenging first round heat. In the heat 03 which is set to commence at 02.45pm Sri Lankan time tomorrow, the island’s biggest challenge will be negotiating USA, France and Canadian teams who possess two sub 46 athletes in their arsenal. The Asian Champion quartet consists of Pasindu Kodikara, Pabasara Niku, Ravishka Indrajith and Aruna Darshana while Harsha Karunarathne will act as cover.

Keep logged onto www.thepapare.com/athletics to receive in depth analysis of the performance of the Sri Lankan athletes