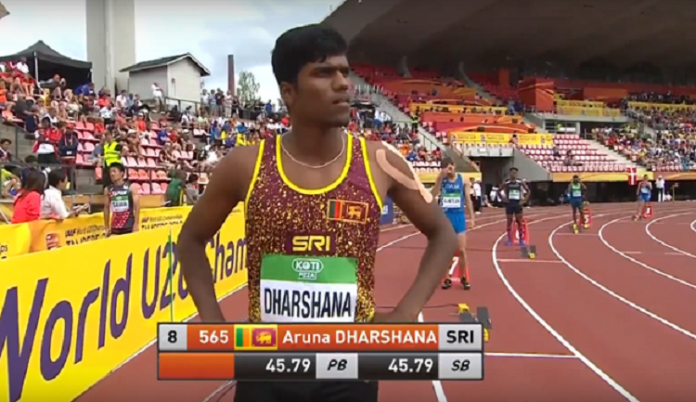 Sri Lanka’s latest beacon of hope on the track, Aruna Darshana along with Junior queen of sprint Amasha De Silva took to the track today in Tampere, Finland on the second day of the IAAF World U20 Championship.

Both Darshana and Amasha qualified for the Semifinals which will be held tomorrow. Aruna earned automatic qualification after managing to win his heat while Amasha had a few anxious moments before managing to go through on provisional qualification as she was placed 5th in her heat and had to wait to until all the heats were concluded to find out whether she had made the cut as one of the fastest 4 losers.

Aruna, who was crowned the Asian 400m U20 Champion at the recently concluded Asian Junior Athletic Championship held in Japan, was drawn to the 8th Lane in the 3rd of seven heats in the Championship. Darshana had to finish in the top 3 spots to earn automatic qualification to the semis and the young sensation did very well to hold his composure and execute his race plan brilliantly in the difficult outside lane. Darshana, despite running in a lane which does not allow him to have an eye on the rest of the competitors did not look hassled during the race and eased to victory clocking 46.81secs.

Drashana went into the IAAF World U20 championship as the 7th best timing with his personal best of 45.79 ranking as one of the best times by an U20 athletes in the world this year. Aruna’s performance of 46.81 at the heat places him 6th in rank of the overall standing after the Men’s 400m heats.  Jamaicans Christopher Taylor and Chantz Sawyers who are placed second and fourth in the standing after their performance in the heat are looking like major challenges for the Gold medal of the event.  Jonathan Jones of Barbados who ran a personal best of 46.05 recorded the best time in the heats while Italian Edoardo Scotti who also recorded personal best time of 46.52 was placed 4th in the standings. 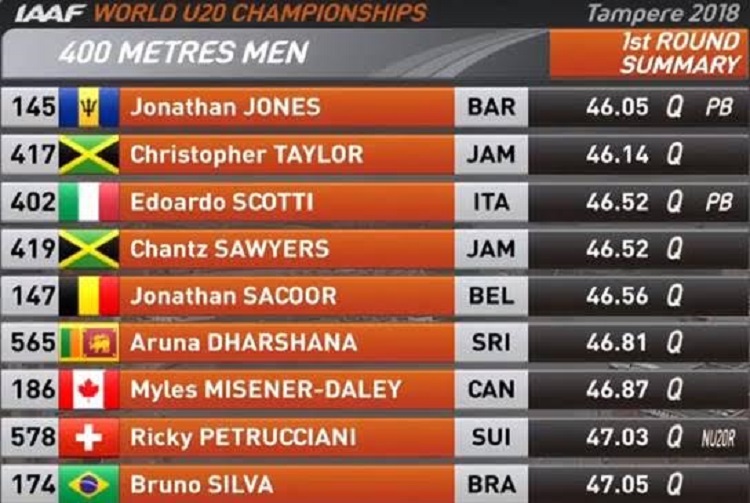 Aruna will now compete in the third semifinal of the Men’s 400m which will be held tomorrow (12th) at 10.20pm Sri Lankan time. He has been drawn to the 6th Lane in the semifinal and will have to secure one of the first two spots to earn automatic qualification for the final. Jamaican Christopher Taylor who clocked 46.14 in the heats and boasts of a 44.88 PB seasonal best, will be Aruna’s main competition in the heat and will take his mark in the 4th lane which should spur the Sri Lankan athlete to better his personal best and go through to the final.

Amasha scrapes through to the Semi’s

Amasha De Silva was the second Sri Lankan athlete to take to the track today and she had to undergo a few nervy moments after the race managing to finish fifth in her respective heat. With only the first four athletes of each receiving automatic qualification, Amasha had to wait until all the heats were concluded to confirm whether she was one of the 4 fastest losers. Young Sprint queen would have surely breathed a sigh of relief as her time of 11.75secs was amongst the four fastest apart from the qualified athletes paving way for her to earn a place in the semifinal of the event.

Sri Lanka sent a contingent of 11 athletes to the IAAF World U20 Championship 2018 held in Tampere,  the Island’s largest representation at the event to date. Steeple Chaser Parami Wasanthi and 800m runner Dilishi Kumarasinghe opened the campaign for Sri Lanka yesterday (10th). Despite running a new junior national record time in the 3000m steeplechase Parammi failed to qualify to the final while Dilishi Kumarasinghe finished last in her heat owing to a niggle in her leg  which she suffered half way through the race. Sri Lanka has also filled a Men’s & Women’s 4X400m relay team while both Aruna and Amasha will be looking to secure a spot in the final.