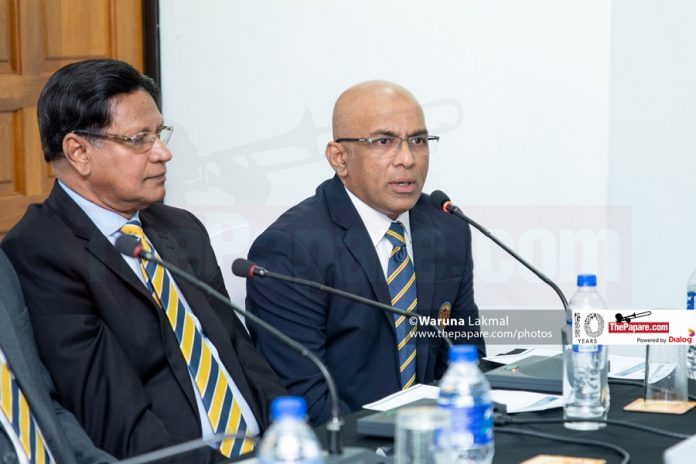 Sacked Head Coach of the national cricket team Chandika Hathurusingha has sent his employer Sri Lanka Cricket a letter of demand to the tune of US$ five million citing wrongful termination of contract and damage to his reputation. According to the former opening batsman’s contract, the arbitration now will take place in Geneva, Switzerland. Hathurusingha has returned to Sydney, Australia where he resides and the lawyers will take the matter further.

SLC officials said that they were prepared to bite the bullet and be involved in a legal battle although it is going to cost them an arm and a leg. Cricket official further said that they will have to pay Hathurusingha compensation but it wouldn’t be as big as US$ five million.

When the parties discussed a ‘mutual separation’ Hathurusingha had demanded to be paid the salary of 18 months remaining in his contract. That would have come close to a figure of US$ 1 million. However, SLC was willing to pay only six months of his salary. With discussions ending in a deadlock, Hathurusingha decided to take legal action.

Hathurusingha was hired by SLC in January 2017 for a monthly salary of US$ 40,000 plus other incentives. His take home per month would have come close to US$ 60,000. He was contracted till December 2020.  However, after the completion of the ICC Cricket World Cup in July last year, Sports Minster Harin Fernando requested SLC to renegotiate the contract. This Hathurusingha refused and was replaced by Mickey Arthur.

SLC officials said that they are managing five foreign coaches at the moment with the salary that they had paid Hathurusingha. According to SLC, with US$ 60,000 a month, they are able to pay the salaries of – Mickey Arthur, Grant Flower, Shane McDermott David Saker and Tim McCaskill.

SLC had called Hathurusingha to show cause claiming that the team had a dismal show under his charge. However, he did have his moments with the highlight of his stint being the series win in South Africa last year. Sri Lanka became only the third country after England and Australia to win a Test series in South Africa.

“LPL will be held next August” – Shammi Silva

Hathurusignha will be issued a charge sheet soon. Points such as not sufficient performance and not providing periodical reports are held against him. Hathurusingha has denied charges. He has also been charged for bringing the game into disrepute. This refers to the ball tampering incident in the Caribbean two years ago where the ICC suspended the Head Coach, captain and team manager.

SLC has had a poor relationship with their coaching staff over the years and in 2012 Geoff Marsh won a legal battle against them for wrongful termination of contract.