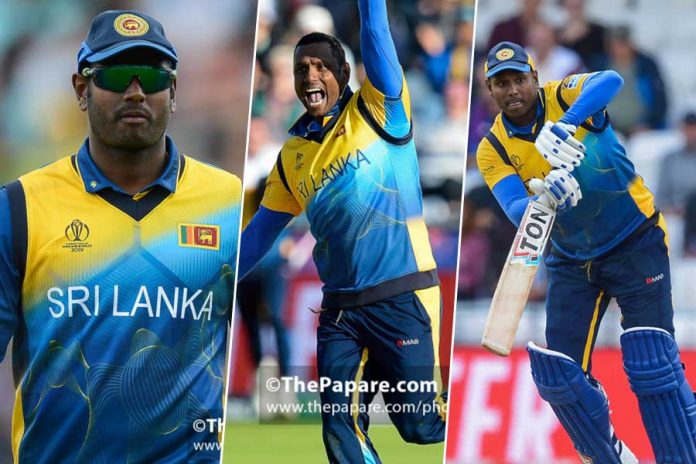 Losing close to 10 kilos in two months and recommencing bowling, Angelo Mathews is all but set to regain his place in Sri Lanka’s T20 setup.

Having been named in the T20I squad to face India later this week, Mathews returns to the shortest format of the game after 16 months out of it.

“Experience is so important. You can’t buy experience [the reason for recalling Mathews]. Another pleasing fact is that he’s bowling again. If you can get a top order batsman that can give you a couple of overs, it just allows you to balance up your side so much better. I’m excited to see where Angelo is at.” Head Coach Mickey Arthur told ThePapare.com before departing for India.

The last time he played T20I cricket, back in August 2018, Mathews was the captain of the side. A lot has happened since then. He almost retired from ODI and T20I cricket after he was made the scapegoat for Sri Lanka’s dismal showing in the Asia Cup. He lost his place in the team as well as his captaincy after then head coach Chandika Hathurusingha criticized Mathews’ poor fitness and running between the wickets. However, he let his bat do the talking in Test cricket against England and New Zealand, before another leg injury late last year hampered his progress once again.

Having successfully recovered from his injury woes, Mathews made a disappointing start in the ICC Cricket World Cup last year. But he ended the competition on a high, scoring a stubborn 85* against England to help Sri Lanka script a historical win, took a crucial wicket against West Indies with his first ball in eight months and then scored his third ODI hundred in a losing cause against India. However, he was not in Sri Lanka’s T20I plans following the World Cup, at least until he resumed bowling.

“We wanted his experience and we won’t be able to get his years of experience by just sidelining him. With him in the setup, even the younger players will be able learn how he used to finish games. We all know about his ability despite the injuries over the past few years. Now he’s fully fit and bowling so he’ll definitely be an asset for us going forward.” Skipper Lasith Malinga, too stressed the importance of having a seasoned campaigner like Mathews in the side before the team’s departure to India.

Sri Lanka will begin their preparations for the ICC T20 World Cup (to be held later this year) with a three-match T20I series against India. Mathews, the all-rounder, will definitely help balance the team, especially in Australian conditions during the showpiece event. For now, Mathews will have to prove his worth to warrant a place in the starting XI.

After skipper Malinga, Mathews is the most experienced player in the squad. Where he will fit in in the batting lineup remains to be seen. But, if Mathews makes the final XI, it’ll be another restart to his career which has always been plagued by recurring injuries. Sri Lanka will hope it is his best yet.