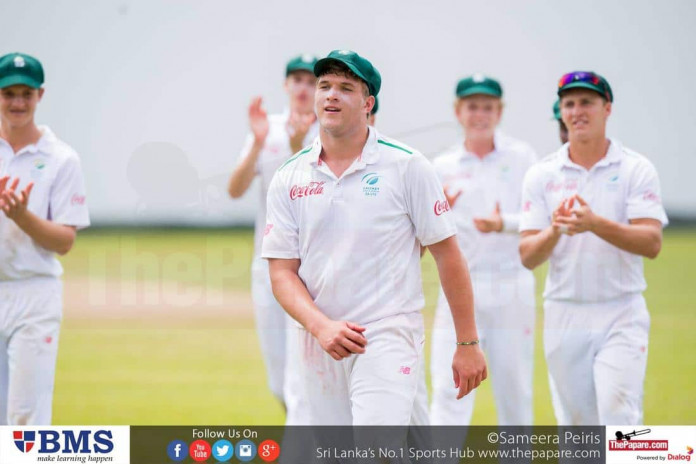 Trinity College middle-order batsman Hasitha Boyagoda playing his first Youth Test was left behind on 79 as the hosts’ were bowled out for 262 in reply to the first-innings score of 295 posted by the visiting South Africans.

The Sri Lanka U19s openers, Pathum Nissanka and Shanogeeth Shanmuganathan commenced day two on 7 for no loss but both of them could not trouble the scorers much.

Captain Avishka Fernando and Vice-Captain Sammu Ashan retaliated well for the hosts’ adding 52 for the 3rd wicket but the South African skipper Wiaan Mulder dismissed the latter for just 15.

Fernando stroked a few classic cover-drives during his 55 which came off 100 deliveries but could not convert it to a big knock. At 104 for 4, Hasitha Boyagoda and Ashen Bandara came together and took Sri Lanka U19s to a commanding position of 202 for 4 but the dismissal of Bandara triggered a major collapse as they lost their last 6 wickets for just 60 runs.


Bandara made a 90-ball 43 with 7 fours while Boyagoda remained unbeaten on 79 off 182 balls. Mulder’s pace and bounce was too hot to handle for the tailenders as he claimed a four-wicket haul for just 28 runs.

The match will be continued tomorrow (5th July) for third and final day’s play.