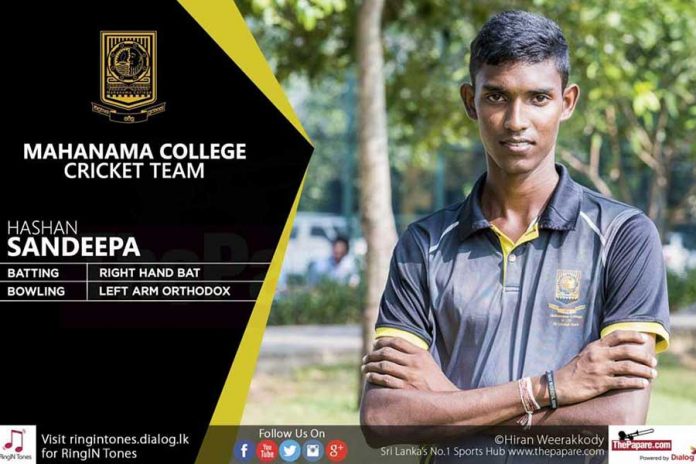 Five matches in the Singer Schools U-19 Division 1 two-day cricket tournament 2017/18 were conducted today around the island.

Group B fixture between Mahanama College and Isipathana College concluded today at Colts ground. Match was ended in a draw but the first innings points were won by Mahanama College. After winning the toss, Mahanama skipper Heshan Hettiarachci decided to bat first and posted 214 runs for their first innings.

In reply, Isipathana batsmen managed to post only 137 runs for their first innings. Left arm spinner Hashan Sandeepa destroyed the Isipathana batting line up, picking 7 wickets for 33 runs. Mahanama batsmen began their second innings 77 runs ahead and scored 80 runs for 4 wickets at stumps on day two.

Group C fixture between Nalanda College and St. Peter’s College commenced today at Nalanda College grounds. After being put into bat first, the hosts posted 203 runs for 7 wickets at stumps on day one. Chamindu Wijesinghe remained unbeaten on 46 runs. Match will continue tomorrow for day two.

Traditional fixture between S. Thomas’ College and St. Benedict’s College commenced today at S. Thomas’ grounds, Mount Lavinia. Visiting skipper won the toss and opted to field first. The hosts declared their first innings at 230 runs for 6 wickets. Maneesha Rupasinghe was brilliant with the bat as he stroked 133 runs for the home side.

Lads from Kotahena were 31 runs for 1 wicket for their first innings at stumps on day one. Match will continue tomorrow for day two.

Group A fixture between Thurstan College and Moratu Maha Vidyalaya commenced today at Moratu Vidyalya grounds. Thurstan skipper Nipun Lakshan won the toss and invited Moralians to bat first. The lads from Moratuwa could not post a solid score on the board for their first innings as they were bowled out for 164 runs. Thurstan skipper Nipun Lakshan, who bowls right arm fast medium picked up 7 wickets for 61 runs.

The visitors replied strongly with the bat as they finished day one at 202 runs for 4 wickets. Left handed stroke maker Nimesh Perera remained unbeaten on 78 runs while right handed batsman Pansilu Deshan scored 55 runs for visitors. Match will continue tomorrow for day two.

Group B fixture between President’s College and St. John’s College commenced today at St. John’s grounds. Visiting skipper won the toss and elected to bat first but posted only 173 runs for their first innings. Left handed batsman Rifaz Maurof top scored with 70 runs. Thamindu Wickramarachchi was the pick of the bowlers for the hosts with 4 wickets for 36 runs.

In reply, the hosts were bundled out for just 138 runs as the lads from Kotte bowled with disciplined line and length. Left arm spinner Hasindu Pramuka picked up 4 wickets for 41 runs for the visitors. President’s College was 30 runs for no wickets in their second innings at stumps on day one. Match will continue tomorrow for day two.