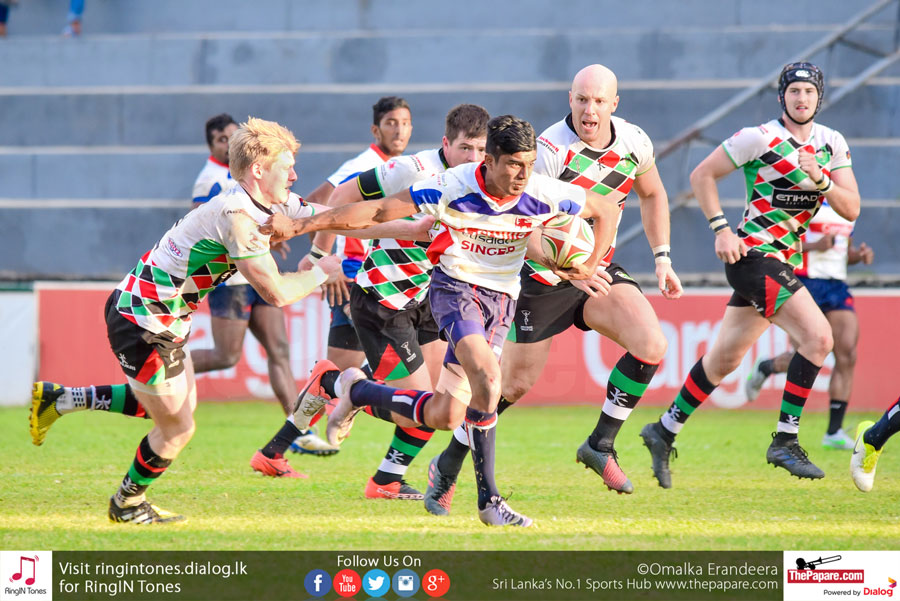 Kandy Sports Club and Abu Dhabi Harlequins played out a 29 all draw at Nittawela earlier this evening in perfect conditions for rugby.


Kandy kept their promise as they gave plenty of youngsters an opportunity to start their first game at this level. Thilina Wijesinghe of Kandy and Andrew Semple of Harlequins had an excellent outing today as both players managed to set up the game well for their teammates. Anurudda Wilwara making his 1st start in one and a half years, scored twice.

It was the visitors who scored the first points of the game, straight off the kick off as Kandy made a mess while trying to collect the high ball. Eventually a scrum was awarded 5m from the try line with a Harlequin feed. They drove the Kandy forwards as scrum half Andrew Semple handed a nice pass to his fly half Joe Teasdale who went over the whitewash to score. Andrew Semple had very little trouble in adding the extras. (Kandy 00-07 Harlequins)

Sample was again in action as the Harlequins found their way back into the opposition’s half before catching them offside. The ref had no issues in awarding a penalty and Sample took maximum advantage of the given opportunity. (Kandy 00-10 Harlequins)

Kandy found their way back into the game at the quarter mark of the game as they managed to level the scores to make in far more interesting for the Kandy supporters present at Nittawela.

Thilina Wijesinghe slotted in a three pointer when a penalty came his way for the Harlequin line being offside, to get Kandy’s first points of the evening. (Kandy 03-10 Harlequins)

Anurudda Wilwara then scored Kandy’s first try of the game as he touched down in the left corner of the Nittawela field. The move started in the right corner of the field as the ball switched hands through some swift passing from the Kandy backline. Thilina added the extras from the left corner flag of the field to level the scores at 10 all. (Kandy 10-10 Harlequins)

The Harlequins’ forwards made some hard yards up the field in the dying minutes of the first half and reaped the rewards as their captain Ben Bolger scored left of the left upright. Andrew Semple converted from the flank making it 17-10 in favor of the Harlequins at Half Time. (Kandy 10-17 Harlequins)

Kandy could have scored another try or two in the first half but they made some crucial handling errors and gave away vital possession. Thilina Wijesinghe was the player of the first half for the hosts.

A fantastic run by Anurudda Wilwara in the early minutes of the second half saw Kandy equalizing again. Put into space by Wijesinghe inside his own 22m, Wilwara sprinted and stepped his way past three defenders to score under the posts. Wijesinghe made no mistake with the conversion. (Kandy 17-17 Harlequins)

The Harlequins, not demoralized by the brilliant try, hit back 5 minutes later with two consecutive tries to make it a 12-point game with nearly 30 minutes to go. First it was the number 24 Sean Stevens who scored for the visitors. The try was a little too easy as they showcased some excellent handling skills and a bunch of tidy offloads before touching down. Sample made the kick look easy from the flank. (Kandy 17-24 Harlequins)

The second try came courtesy of their fullback Jona Marshall who ran a brilliant line inside Wilwara and Wijesinghe before exploiting the gap to dive in at the left corner flag. Sample this time pulled it slightly to the right and missed the conversion. (Kandy 17-29 Harlequins)

Kandy yet again missed some opportunities to score the easiest of them came to Lasitha Aththanagoda, who chose to go by himself when he had 4 players outside on the wing with no player defending the line. However, the mistake didn’t cost Kandy much as they got back on the scoreboard through a penalty try. The Harlequins’ line was found offside on numerous occasions before the referee decided to award the try. (Kandy 24-29 Harlequins)

On the brink of Full-time Kandy made a set move from the back of the scrum, dummy passing and throwing a cut out pass to Arshad Jamaldeen who neatly cut back infield and threw an overhead pass to Lavanga Perera who dived over the try line in the far corner of the field. This made the scores level with a difficult kick to come. Thilina Wijesinghe was substituted so it was Arshad Jamaldeen who took the kick, unluckily for the home team, he found the right upright, bringing the game to an end at 29 points all. (Kandy 29-29 Harlequins)

Kandy will next week play the Bahrain Rugby Sports Club on the 22nd of September; stay with ThePapare.com for live coverage of the game that could crown Kandy as Champions.