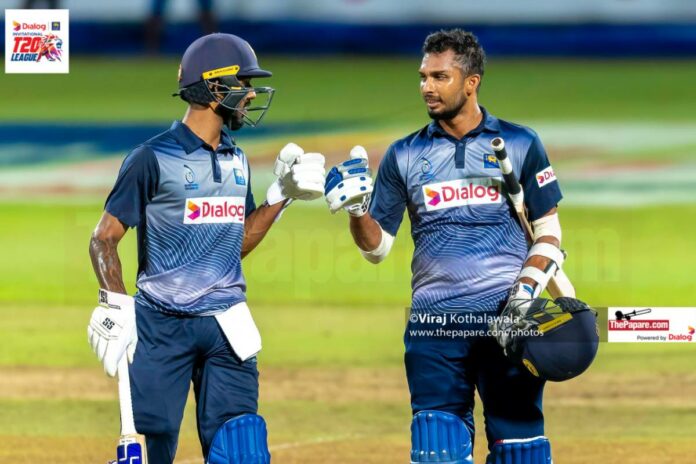 Due to the persistent rain at Pallekele stadium, the encounter between SLC Greens and SLC Greys was reduced to a 10-over per side match.

After winning the toss, SLC Greens skipper Ashan Priyanjan invited the opposition to take the first lease of the wicket.

Both teams made two changes to their playing XIs. SLC Greys brought in Nuwanidu Fernando and Chamika Gunasekara in place of Lahiru Madushanka and Udith Madushan.

On the other hand, SLC Greens brought in Lakshan Sandakan and Vishwa Fernando replacing Suminda Lakshan and Lahiru Kumara.

Kamil Mishara and Lasith Croospulle opened the batting for SLC Greys and provided a flying start to the innings putting up 32 runs in 2.1 overs. However, SLC Greens managed to fight back as left-arm seamer Vishwa Fernando struck twice in his very first over.

At 43 for 3, the skipper Dasun Shanaka joined Mishara at the middle and built an unbeaten 94-run partnership for the 4th wicket as the pair took the team to a massive score of 137 runs in 10 overs.

Shanaka scored 55 runs off 22 balls with 5 fours and 3 sixes while Mishara contributed with a knock of 46 runs off 24 balls including 7 fours and a six.

As the rain interrupted the play once more, the target was revised as 111 runs in 8 overs for SLC Greens.

In reply, SLC Greens got off to a flying start thanks to the opening batsman Lahiru Udara who stroked a quick-fire 33 runs off 10 balls with 5 fours and 2 sixes.

The left-arm spinner Chathuranga De Silva managed to dismiss both the openers Udara and Ashan Priyanjan in two consecutive overs putting SLC Greens under some pressure at 52 for 2 in 3.4 overs.

The number three batsman Pathum Nissanka looked good in his short stay at the crease as he, unfortunately, ran himself out after scoring 21 runs off 12 balls.

At 69 for 3 in 5.3 overs, the rain interrupted the play again, therefore SLC Greys awarded the victory as they were 4 runs ahead under Duckworth-Lewis (D/L) method.

With this win, SLC Greys continue their unbeaten streak in the tournament as they secured 4 wins out of 4 matches played so far.