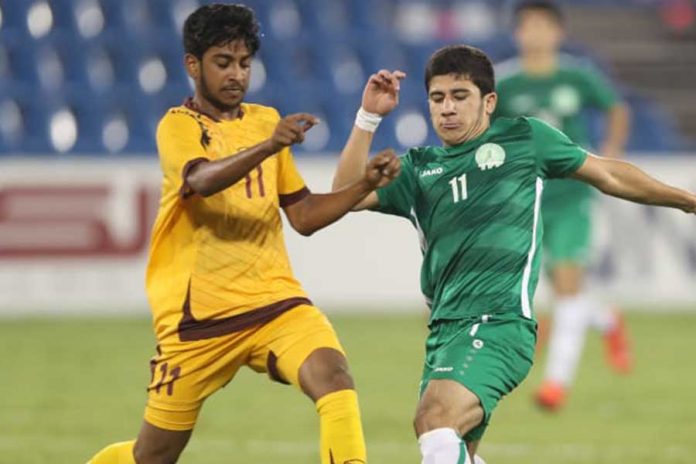 The Sri Lankan and Turkmenistan Under 19 teams came into their head-to-head with two losses each to hosts Qatar in their previous games. A dead rubber in terms of qualification, was nothing but a battle of pride at the Doha Sports City Aspire Pitch no 4.

Sri Lanka succumbed to their 2nd defeat when they lost 3-0…..

Sri Lanka started the match very positively with Kannan Thenushan almost gaining the lead in the 6th minute after a good cross coming from Shabeer Razooniya on the left wing. Turkmenistan defender managed to block the shot to deny Thenushan.

Borjakov Aly came close to give the Turks the lead after a good build-up play but his shot from out of the box went close past the upright.

Hasika Navodha got into the referee’s books early for a deliberate block as a breakaway move by Turkmenistan deemed threating. Navodha took one for his side as the resulting free kick was successfully cleared away.

Mohamed Mursith almost gifted Turkmenistan a goal when his clearance kick inside the box hit the Turkmenistan forward Myratberdiyev Rahman. Rahman got the return pass only to hit it wide, letting the Lankans off the hook.

Mohamed Sajid was a live wire for Sri Lanka in the left of midfield and orchestrated moves going forward.

Hydyrow Shamammet was then booked for a simulation dive inside the Lankan penalty box. The Indian referee Tejas Nagvenkar was on the right spot and called justly.

Mohamed Sajid once again was the play maker when he worked his way beautifully and released Shabeer Razooniya on the left. The cut back from Shabeer towards Sajid who was following up on the move was blocked away by the defense as another chance went begging for the Lankans.

Mohamed Kursith then went into the referee’s books for a careless foul as the Lankans got more of the ball as procession returned to Turkmenistan.

Lankans then took the lead through Mohamed Sajid in the 42nd minute. A long throw by Abdul Barsith was flicked back by Mohamed Kursith. Sajid climbed higher than the defender and headed one into the far corner.

Goal provider Mohamed Kursith then got sent off for a second yellow card just on the stroke of half time for an unwanted challenge on the Turkmenistan midfielder.

Chopanov Resul then hit the wood work on added time after he found himself free inside the Lankan box, soon after Shishan Prabudda was booked for another careless foul as the referee called half time.

Sri Lanka came into the second half with 10men and formed a 4-4-1 and looked solid. Shabeer Razooniya almost doubled the lead with a powerful shot which was saved by Ahallyev Rustum in the Turkmenistan goal.

The defense and midfield of the Lankans were disciplined and played as a unit as Turkmenistan tried hard to beat the defense. Lankans kept possession when they won the ball back and looked to attack rather than kick it away.

Mohamed Mursith kept the Lankans in the game with a sharp save from a close shot by Borjakov Aly. He was unable to do so when Chopanov Resul converted from a poorly defended corner to level the game at 63rd minutes.

Sri Lanka met another blow in the 67th minute Hasika Navoda was sent off for a second yellow card offense with a moment of madness. The resulting free kick was taken brilliantly by Borjakov Aly to give the lead to the Turks.

Lankans then started to crumble as Turkmenistan took advantage of the 2 extra men. Hydrow Shamammet scoring easily after a long ball broke the defense. The resolute Lankans did not give up and struck almost immediately through Mohamed Sajid this time going around the keeper and slotting it into the goal. Kannan Thenushan gave the assist with a good pass to beat 2 defenders.

With their tails up and searching for an equalizer, the Lankan side was bold in the attack even with 9 men. The final hammer blow came in the 89th minute when Myratberdiyev Rahman calmly slotted the 4th goal for Turkmenistan as Mohamed Mursith could only save the initial shot and the rebound finding unmarked Rahman.