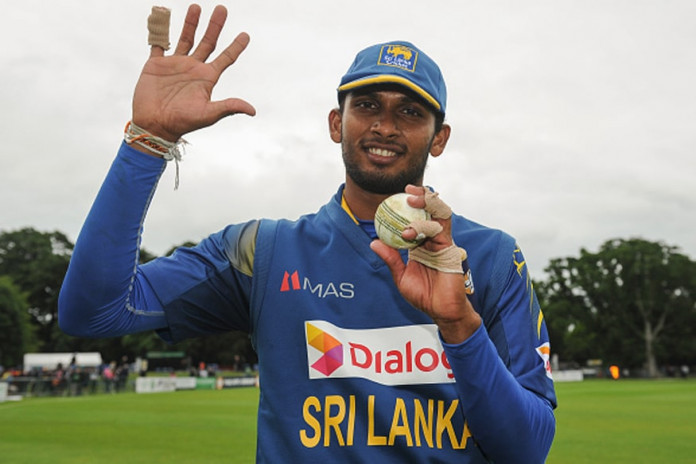 He grins like a Cheshire cat whenever he takes a wicket and flashes his most winning smile when he hammers the ball into the stands, that’s Dasun Shanaka for you.

The cheerful guy from Negombo scored a blistering 42 off 19 balls on Thursday and then took 5 for 43 to bowl the tourists to a convincing 76-run win, their first since arriving in England last month for a tour of the British Isles. 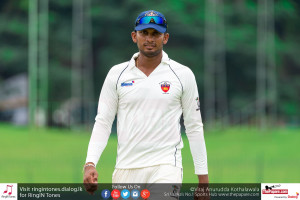 His special cameo, which featured pure flat-batted hitting, ratified the thought process of the selectors that he would be the next big pinch-hitter for the Island nation in the shorter formats of the game. The way he moved the ball both ways consistently from just short of a length hurried the batsmen into their strokes and left them hurrying back to the pavilion.

“Dasun had a dream debut and we are all happy for him and hopefully he will continue in the next few matches. He bowled good lengths and was brilliant.”

Mathews said of the 24-year-old Shanaka, whose lively medium fast-bowling has impressed one and all since he came into the international scene last year.

Soon after becoming the 3rd Sri Lankan to take a five-wicket haul on ODI debut (Uvais Karanin and Charitha Buddhika being the other two), Shanaka found time to thank his parents for all the guidance and blessings while dedicating the performance to his little brother, who celebrated his birthday yesterday, on his official Instagram account.

He barely had an opportunity to showcase his brute strength with the bat and the wicket taking ability with the ball when he was given his T20I cap last August against Pakistan. He hit the headlines in the following club season when he was the star performer for the Sinhalese Sports Club in the SLC Premier T20 Tournament 2016.

On a hot and sunny afternoon at the Colts Cricket grounds, he came to the crease when two wickets were down and used his wide shoulders and the ability to clear the ropes against Saracens SC, clobbering 16 sixes in an innings worth 123 from 46 balls. A week earlier, he did the same damage against Galle CC smashing 131 off 48 deliveries.

With these two bombastic knocks, the hard-hitting right hander was always going to make the Sri Lanka T20 squad to tour India in a series preceding the WT20. Before taking wings he was determined to make a difference, “I just want to do my best, hit a six when everyone’s least expecting or a take a wicket out of nowhere” he said exclusively to ThePapare.com.

He bewildered the star-studded Indian line-up on a green top in Pune, not with his batting, but to everyone’s surprise, his bowling. He landed the seam upright on a length and uprooted Suresh Raina’s leg-stump with an in-dipper, bounced out MS Dhoni and trapped Hardik Pandya plumb in front to end up with superb figures of 3 for 16. 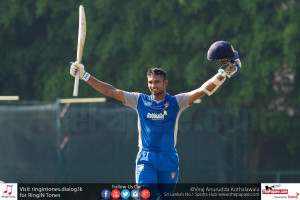 In the must-win World T20 clash against England, Sri Lanka almost completed a historic comeback courtesy Mathews’ brilliant 73 but in the meantime Shanaka hit two crucial fours and a towering six in his 9-ball 15 before he found a flying Joe Root at mid-off; if that punch from the middle of his bat went past Root, the game could have ended with a different result.

After being picked on merit for his first tour with the Sri Lanka Test squad this summer, Shanaka made a name for himself with the bat hammering a thumping 112 against Leicestershire in the second tour game which earned him a rightful place in the Sri Lanka Test XI.

After opting to bowl first on an overcast morning, Sri Lanka was declined of early wickets by the English openers, Alastair Cook and Alex Hales. Mathews’ last resort was Shanaka, playing his first Test match.

He bowled a few wide deliveries, out of the reach of Alex Hales, but a few balls later concentrated on an accurate length to bowl a maiden over. In the next over, the 21st over of the innings, Shanaka tempted Cook to go for an expansive drive with his fuller length and was indeed rewarded.

Shanaka was picked in the team primarily for his batting, but for his ill-luck he came up against two nearly unplayable deliveries off Anderson and Broad and was part of the Sri Lankan Perahara at Leeds. He was benched for the next two matches until he once again took center stage in Dublin on 16th June.

A humble person from the beginning of his career at St. Peter’s College, Negombo, he later attended Maris Stella College, Negombo where he partnered with Dushmantha Chameera to torment many school batting lineups.

What’s special about Shanaka is how seriously he takes his cricket, he is happy to hit the gym on a Sunday morning with a wide smile on his face, fight his way through the cold to do some cardio in spite of everything.

The 24-year old has risen through the ranks so quickly and managed to keep two fast- bowling all-rounders in the caliber of Thisara Perera and Farveez Maharoof out of the side. With Angelo Mathews already doing his bit as a batting all-rounder, the question remains on how well Shanaka will perform in the near future.