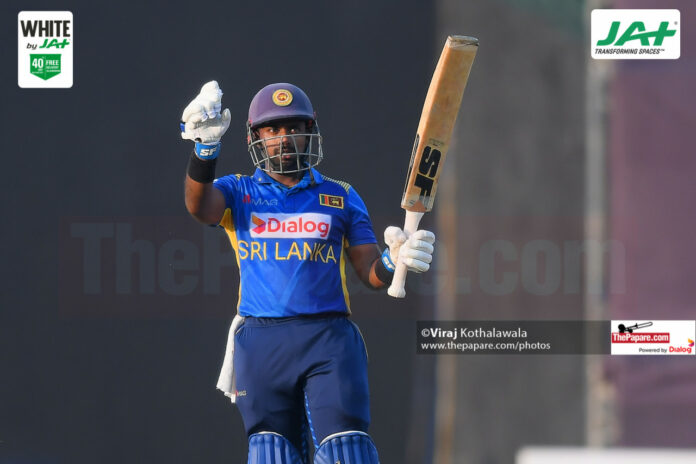 On Friday night, in a pub somewhere along Nottingham Road, sipping away a Black Sabbath, Mickey Arthur must be having quite a chuckle when he sees Pathum Nissanka walking away with Player of the Series award. It has been quite a turnaround for the 23-year-old in the last ten month since breaking into the national cricket team.

Pathum came along with a reputation of being a good long format player. His First Class average of 63 suggested so and it was no surprise when he took to Test match cricket like a duck taking to the water becoming the first Sri Lankan to score a Test hundred on debut.

Some did not like the idea that Pathum was in fact first given a break in white ball cricket instead of Tests. He had been prolific in the longer format in domestic cricket but was average in local one-day competitions. But the good thing with Mickey is that he identified talent and backed them.

Read: A year in which Sri Lankan cricket turned a corner

When Pathum made his T-20 debut ahead of his Test debut in the Caribbean, many felt that the youngster was being thrown into the deep end. But he was given the long rope to find his feet in international cricket. He wasn’t an instant success in T-20s and ODIs like he was in Tests, but when you identify talent, you back them. That’s what Mickey told us. Words like ‘giving the long rope’ didn’t make much sense those days as you felt that you are playing with a young man’s confidence by playing  him in the wrong format. But Mickey has had the last laugh. His young charges are coming up with match winning knocks.

Celebrating along with Pathum was another young player, Charith Asalanka, who was Man of the Match in the final ODI as Sri Lanka sealed a 184 run win to wrap up the three match series. Barely five foot, five inches tall, these two rookies are going to have a massive impact moving forward.

In two games now, Asalanka has come up with match winning efforts. Although his 71 in the first game didn’t win him Man of the Match award, it was a classy knock. Chasing 297 under lights was tough work and there was plenty on offer for the quicks under light as they nipped the ball around. Asalanka was solid in defence and looks a player who is more at ease playing quicks better than the spinners.

Read: Coming of age of Dhananjaya

There’s some disappointment that Sri Lanka could not finish this 3-0 as they would have bagged an additional ten points that would come in handy in automatic qualification for next year’s World Cup. But having said that, a series win with a bunch of young players need to be commended as Zimbabwe had taught Sri Lanka a harsh lesson the last time they were in town five years ago.

The 2017 side that lost the series had several experienced heads but the current team is full of rookies and it has been a terrific ride.

Dasun Shanaka has been quite impressive as a leader although he did get a few calculations wrong in the second ODI not utilizing the full quota of his premier bowler. But he has been able to bring the side together and play as one unit. That’s good to see. The only criticism about his tenure is that he was neither contributing with the bat nor doing much with the ball in ODIs. But those criticisms have been put to rest with a truly remarkable performance that helped Sri Lanka come so close to win the second ODI. His maiden hundred would have given him some confidence.

The country had seen cricket behind closed doors for almost two years and glad to see SLC welcoming the fans back. It would have been a tough call given that cricket series were getting called off elsewhere due to COVID scares. But both the board and health sector did well to accommodate fans who had been double vaccinated and it was a huge party at Pallekele.

With only half the stadium allowed by health experts tickets got sold out well in advance. Deprived of cricket for so long, the fans put up a grand show throughout the series and on Friday when the game ended too early, they wouldn’t simply leave the ground singing bailas and making merry to their hearts content.

Some fans even took the liberty to come onto the field after the teams had left and pose for selfies. The cops and security weren’t going play spoil sport and let the fans have some fun.

There’s lot of cricket coming up this year including the Asia Cup and hopefully the authorities will admit more fans moving forward. When India is in town, many fans from overseas fly over too and there are indications that in future we will be allocating as much as 80 percent of the capacity like  they do elsewhere. Good times are ahead.