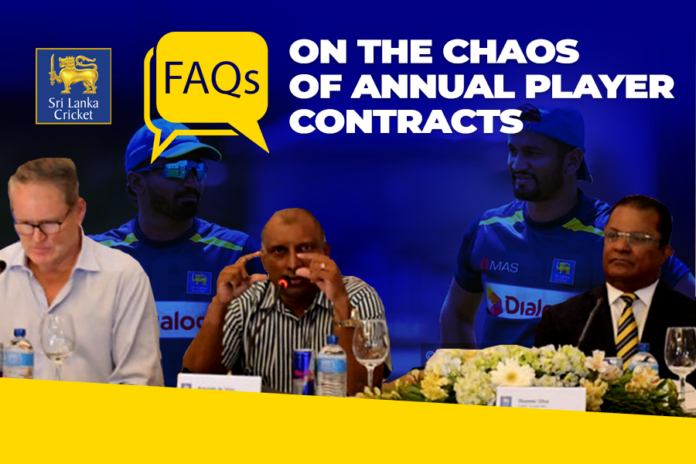 The talk of the town over the past few weeks has been the dispute around the Annual Player Contracts between the Sri Lanka Men’s Cricketers and the Sri Lanka Cricket administration.

The issue escalated last Monday at the team hotel in Colombo, a day prior to the scheduled departure of the Sri Lankan team to the United Kingdom, where there were reportedly heated arguments between the players and SLC officials. Following a written confirmation from the SLC that the matter will be sorted after the tour, we take a look at some of the Frequently Asked Questions (FAQs) regarding the matter.

Who drew up the contracts?

The new performance-based player contracts were drawn up by the Sports Minister-appointed Cricket Development Technical Advisory Committee headed by Aravinda De Silva along with the newly appointed Director of Cricket, Tom Moody. Input has been provided by the national selectors and the head coach as well. Previously, the contracts were done by the SLC Executive Committee along with the national selectors.

What are the grading systems announced by SLC?

24 players have been slotted into four grades – A, B, C, D with each grade further divided into three sub-categories bearing different retainer values. The players have been graded by Head Coach Mickey Arthur and the national selectors led by Pramodya Wickramasinghe.

What are the players scored on?

Players were scored on the parameters of Performance (out of 50), Fitness (out of 20), Leadership (out of 10), Professionalism (out of 10), and Future Potential and Adaptability (out of 10) for a total score out of 100.

What was the system used to allocate points? Was it fair?

The performance scores were allocated for the players’ efforts on the field since the beginning of 2019 in light of the fact that there were very few games played in 2020 (12) due to the pandemic.

The Fitness scores have two components – the newly-introduced 2km fitness run and the skinfolds test which make up the 20 points there. However, according to some players who wished to remain anonymous, the process through which the rest of the 30 points (for leadership, professionalism and future potential and adaptability) has not been made clear to them.

Which players got hefty contracts?

Dhananjaya De Silva and Niroshan Dickwella were bracketed in the highest category, with a contract worth 100,000 USD, nearly double the amount they received last time around. Young players such as Pathum Nissanka, Ramesh Mendis, and Ashen Bandara, who have only played a handful of games, coming into the game in 2021, have been awarded maiden retainers of 55,000, 35,000 and 25,000 USD respectively.

Did any players receive pay cuts?

Angelo Mathews, by far the most experienced player presently for Sri Lanka has been offered a contract of 80,000 USD, with a hefty cut of 50,000 USD from the previous contract cycle.  Test captain Dimuth Karunaratne’s retainer has dropped from roughly 100,000 USD to 70,000 USD this year. Fast bowler Suranga Lakmal has been offered only 65,000 USD after getting 100,000 USD last time around, while Dinesh Chandimal has been cut 35,000 USD from his last retainer. He is to be given 45,000 USD in the new cycle.

What other incentives are on offer in the new scheme?

When was the deadline for the players to sign the contracts?

Sri Lanka Cricket had earlier given a deadline of 3rd June, five days before the scheduled departure for the UK tour, for the players to sign the annual player contracts. The deadline was extended by another couple of days but the players, through their designated lawyer, Nishan Premathiratne, announced that they would not sign the contracts until the dispute is resolved.

What are the players demanding?

The players in unison are demanding transparency in how the points were allocated to each player with regards to the categorization. Also, with SLC deciding to bring down the number of nationally contracted players to 24 from 30, they are also requesting compensation or contracts for some of the players who they feel have been unfairly omitted.

Are the players demanding more money?

The players have not asked for an increase of the proposed retainer amounts. However, there is a concern among the players that only 7% of SLC’s budgeted earnings are being disbursed to the cricketers and that the players are the only ones who are getting a pay-cut. The cricketers have reiterated that playing for the country is their first and only ambition.

What will the final outcome be?

The SLC executive committee reportedly even went to the extent of pressurizing the players with 3-year suspensions if they didn’t sign the contracts ahead of the UK tour. However, ideally that shouldn’t be the way to approach the matter.

With plenty of personnel involved in this chaos, it is wise to bring everyone to one table, including the discarded senior players and discuss the matter after the England tour. SLC should have their answers ready along with the assessment reports while the players must get their act together and focus on the performances on the field.

The Aravinda De Silva-led technical committee is adamant that this system should be put in place for the betterment of the game in the country while the Shammi Silva-led executive committee feels the grading of players could be adjusted.

However, with an important series against India coming up for Sri Lanka, all in power must make sensible decisions to resolve the matter soon. If not, the brand value/image of Sri Lanka will reach an all-time low if the players resist signing the contracts further.

What is your opinion on the matter? Tell us in the comments section below.