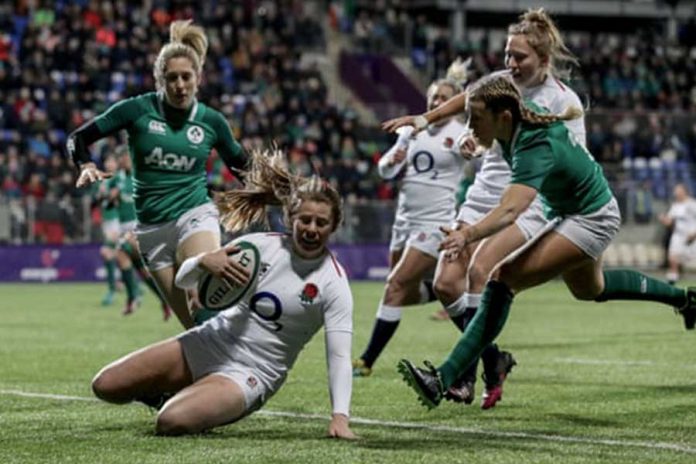 The Women’s Six Nations kicked off on a freezing Dublin evening but, as the mercury dropped, England’s performance rose to the occasion. A dominant pack, aggressive defence and clinical finishing by Simon Middleton’s newly-professional side overwhelmed Ireland.

England know things will not be this straightforward against the grand slam champions France next weekend but, with the centre Emily Scarratt influential on her comeback, this was a perfect start. By the time Emily Scott and Bryony Cleall, both second-half replacements, went over for the seventh and eighth tries in the dying minutes England’s few supporters at Donnybrook had a very warm feeling.

Scarratt’s return to XVs after two years playing sevens was a big boost for England, the centre’s almost telepathic midfield partnership with Katy Daley-Mclean so vital over the years.

Scarratt soon made her mark with a midfield break after England had won swift ball from a lineout and Jess Breach found room on the right-hand touchline to touch down. The score looked ominously easy.

Daley-Mclean spurned the chance of a very kickable penalty as the English pack chose to bludgeon their way over from a series of mauls. The fly-half then kept the scoreboard ticking over with a penalty from in front of the posts after the desperate Ireland defence had repelled the danger.

Sarah Bern, the England prop who was also returning after a year out, made a storming break down the middle of the field and Scarratt again gave Breach a chance to create havoc down the touchline but the wing was hauled into touch. England were now moving through their gears. Hannah Botterman, their other prop, made a big carry and the ball was moved to the blindside where a clever little chip by Daley-Mclean was cleverly touched down by the full-back Sarah McKenna.

Botterman, the 19-year-old Saracens tighthead, continued to cause the Irish defence problems. She made another break but the TMO this time denied Breach a second try when a replay showed she had just knocked the ball on as she was tackled by Aoife McDermott.

England suffered a setback, though, when their experienced flanker Marlie Packer had to leave the field just before the break. Packer had played a big part in a dominant performance by the England pack and her absence against France would be a major blow.

Bern crashed over for a try near the posts just after the break which Daley-Mclean converted. England now had a 20-point cushion and Ireland’s resistance was broken.

Sarah Hunter then took the ball from a lineout and the England pack drove the hooker, Lark Davies, over for their fourth try. Ireland were unable to stem the white tide and the substitute Rowena Burnfield popped up a pass for Daley-Mclean to dart over. There was some consolation for Ireland on the hour when the England scrum buckled and they were awarded a penalty try. But Zoe Harrison ensured England had the last word. She had been on the field for barely five minutes at fly-half when she breached the Irish defence for a sixth try.