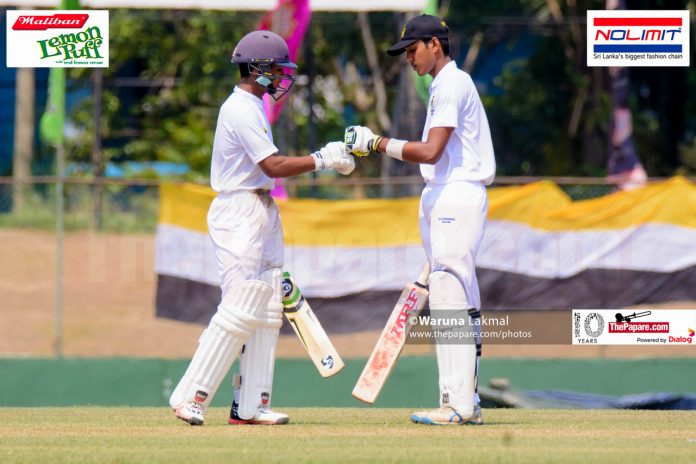 The DS-Mahanama rivalry recognized as the “Battle of the Golds”, commenced today at the P Sara Oval Grounds, Colombo. This meeting happens to be one of the youngest encounters of March Madness with a history of just 12 years, up to date.

DS. Senanayake College was led by all rounder Pasindu Adithya and his counterpart from Mahanama College was Pathum Boteju, for the year 2019.

Mahanama Colllege won the toss and invited D. S. Senanayake College to bat and struck in the very first over to dismiss D. S. opener Abhishek Liyanarachchi for a naught.

Liyanarachchi’s opening partner at the crease, Amitha Dabare raced to 36 runs in 46 balls but inside the first 15 overs of the match, the batting team was reduced to 68 runs for the loss of 5 wickets and looked to be in deep waters before wicket keeper batsman Teron Baskaran decided to anchor the innings with a marathon 160 balls for 66 runs to keep Senanakian in the hunt.

An evenly poised battle to be staged at DS-Mahanama

Number 9 & 10 batsmen, Sandaru Wickramarathne and Maneendra Jayathilake made crucial contributions by adding 70 runs to the 9th wicket. The duo scored 56 & 38 respectively to take the total to 244 after their horrendous batting collapse, in the morning hours.

Right arm off spinner Lahiru Vithana was the pick of the bowlers as he was responsible for sending 3 of the opposition players back to the dressing room, but more importantly, the fielding effort put forward by Mahanama College made the highlight package as three runouts were credited into their account.

D.S. Senanayake College declared their innings at 244 for 9 taking maximum advantage of the dying light at the Oval.

But Mahanama openers, Vinuka Rubasinghe and Captain Pathum Boteju were able to survive for 8 overs to add 20 runs to their overnight account. Mahanama currently trail by 224 in their first innings at stumps and will look to score quick runs tomorrow before inviting D. S Senanayake to bat again with a safe lead.

So far, this battle has produced a result only once, when D.S. Senanayake College won under their latest national product, Binura Fernando. 11 encounters have ended in draws.

Stay logged on to ThePapare.com for LIVE coverage, photos & latest updates from the 13th Battle of the Golds Encounter between D. S Senanayake College and Mahanama College. Live action of the limited overs leg which is played for the Aravinda de Silva Trophy can be viewed on Channel Number 01 on Dialog TV on 6th of April.

The annual cricket encounter played by two prestigious colleges from the Colombo District, the Battle of the Golds between…