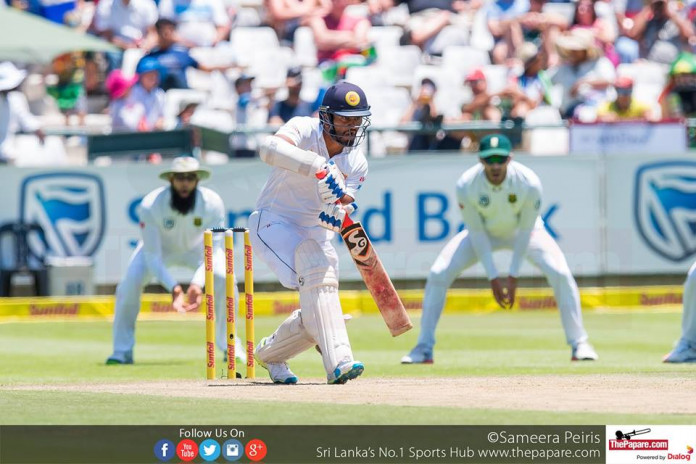 Sri Lanka test opener Dimuth Karunaratne went on to complete his double century as the hosts took control at stumps on day three.

Sri Lanka A resuming from their overnight score of 333/3, lost the wicket of Sadeera Samarawickrama with the addition of just 12 runs to the total. Samarawickrama was dismissed 15 runs short of a well deserved double hundred when he was trapped in front by right arm quick Toby Roland-Jones.

Sri Lanka A skipper Dhananjaya De Silva then joined Karunaratne and the duo put on a 131 run partnership for the fifth wicket before De Silva fell for 74 runs inclusive of 13 fours.

Karunaratne’s mammoth knock ended when he was eventually dismissed for 212 off the bowling of Ollie Rayner. He faced 319 balls during his knock while also striking 23 boundaries.

Roshen Silva fell cheaply once again but Jeffrey Vandersay  and Malinda Pushpakumara made useful 20’s as the host made 548 all out while securing a 195 run first innings lead.

England Lions were in a spot of bother when play was called off for the day as they lost two quick wickets minutes before close. Pushpakumara had Haseeb Hameed caught behind by Samarawickrama while skipper De Silva trapped Tom Alsop in front.